A note of explanation that may not be needed, but just in case: “Prohibition” was the 1919-33 ban on alcoholic beverages in the U.S.


A 1919 Canadian 10-cent piece struck in Ottawa the year Prohibition was ratified south of the border, in the U.S. It was also the year Edward, Prince of Wales, traveled the length of Canada and first visited the U.S., returning home to the U.K. in December.

Recalling the 1919 experience in his 1951 memoir, A KING’S STORY, the former king Edward VIII wrote, “When I arrived home my father [George V], who had never been to the United States, asked me innumerable questions about various American phenomena—the height of New York’s skyscrapers, the number of motor-vehicles in the streets, the state of President Wilson’s health…

“But most of all he was curious about life in America under Prohibition…And of all the information that I brought back I think what delighted him most was the following doggerel picked up in a Canadian border town: Four and twenty Yankees, feeling very dry, / Went across the border to get a drink of rye. / When the rye was opened, the Yanks began to sing, / ‘God bless America, but God save the King!’”

And so here on this 1919 10-cent piece—sufficiently valuable at the time to have been useful in a Canadian bar—is the King that Americans surely (and loudly!) toasted. 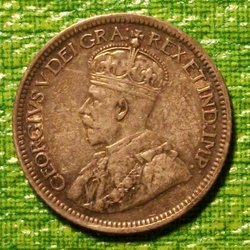 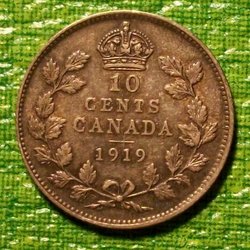 The coin has a nice toning! Thank you for the nice story as well. Best regards, KarlAntonMartini
Tokens forever!
Nach oben

Once again a coin has a story to tell. Thank you, villa, for sharing.
Sigi
.
Sieh meine Russland-Kupfer-Sammlung
www.sigistenz.com
Nach oben

Very nice! Thank you for sharing both coin and story with us.
God save the King !
Grüsse, Mynter
Nach oben

Thank guys. And that little 10-cent piece does have a pleasing look, I think, and it’s always fun to know other people who can appreciate it.

I had been hoping to quickly follow this with a much lengthier (ocean liner) post that I’ve been playing with for a while, but…delays. I hope to get it done soon. I’ve really enjoyed all the new stuff I’ve encountered, but I’m afraid my wife thinks I need a change of conversation. Soon.