Big British pennies were once a household must-have when it came to cold weather and cold weather work, and both were in the offing for Berengaria. (Shaving and dressing on a chilly morning, trying to get ready for a long day outside? Got to have a stack of pennies in the house for the penny-in-the-slot gas meter!)

Things began to happen fast for Berengaria. She had been scheduled to remain in service until 1940, but after a trans-Atlantic trip to New York in late-February-early-March 1938, she suffered yet one more of her many electrical fires.

The authorities in New York wouldn’t issue her a certificate to carry passengers, so Berengaria quickly departed for home, empty. She remained in Southampton, idle, until December 1938, when—having been sold for scrap—she sailed for Jarrow on the River Tyne.

She had been sold to Sir John Jarvis, whose avowed purpose was to help the depressed economy of the area, and so it did—some 200+ local men were hired to do the scrapping. At the time, Berengaria was the largest ship ever to be broken up for scrap, so of course the process soon became newsreel fodder (her middle stack came down first). 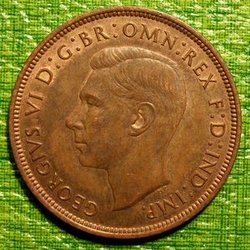 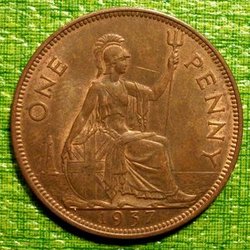 The work began immediately, getting ready for the giant mid-January auction of Berengaria’s furniture and fixtures. The “Jarrow men” would’ve begun to have new money in their pockets, thanks to the dying Berengaria, and the money (or at least the promise of it) began to spread around town.

I expect the Christmas of 1938 was a lot merrier in Jarrow than it had been the year before. Families had more of the big bright pennies for Christmas stockings, for one thing. (And the Royal Mint had stopped its Grinch-like toning of the pennies a couple or so years earlier, which helped.)

I expect the Christmas dinner tables were better set, and the people around them—I’ll bet—laughed more easily.

And I’ll bet, because of all that clambering on, in and around Berengaria, preparing to cut her up, that the Christmas puddings in Jarrow that winter were bigger and better than the year before. And the silver threepences hiding inside the puddings—I’ll bet—had been easier to lay hands on.

(It was more than just custom that required the threepences used in the Christmas pudding to be the usual silver coin—I’ve read that there was considerable nervousness about the behavior of the new brass threepence in pudding!)

And I’ll note also that the silver coin was supposed to have been more popular in nearby Scotland than it was further south. 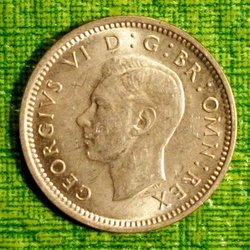 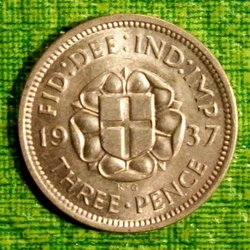 But Berengaria did not continue to speed to her end. War came again to Europe in September 1939, and with the bulk of the job done—she had been scrapped to her waterline—final demolition of the old liner had to wait. (Time and labor are always in short supply during wartime; I wonder if that 2,000 tons of cement in her bottom contributed to the delay?)

And then came the news—

“ADVANCE BRITANNIA” shouted the “VE Day Victory Edition” of the Evening Standard, which, for a penny, a Briton could have picked up at a newsstand the evening of 8 May 1945. “Brief rejoicing—then Japan” it cautioned.

A penny for the paper… 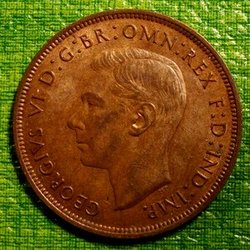 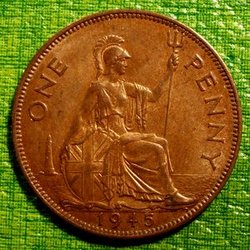 The scrapping of Berengaria finally resumed after the war, and after one last trip, to Scotland—she was towed up to Rosyth on the Firth of Forth, in July 1946.

Not long thereafter, Berengaria/Imperator ceased to exist. 1910-1946. What a parade of years.

And what a parade of coins must have accompanied that ship during that quarter-century of work (1913-1938). We’re all coin-people here, and everyone will have their own ideas, but I guess I’ll end this with another British florin, a 1946.

I suppose a florin like this one could have got aboard Berengaria/Imperator, if only in the pocket of one of the workers doing that final demolition. But if not, it’s a good bet, I think, that doing that final clean-up work would somehow have put a 1946 florin into a pocket, or a purse.

I find I don’t want to end this. But I will, by simply saying that the British silver coins of 1946, like this one, were the last silver coins struck for circulation in the United Kingdom. Their withdrawal began straightaway, and the recovered silver…stop! 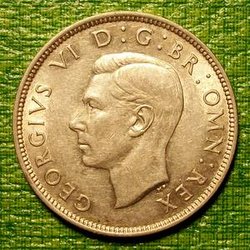 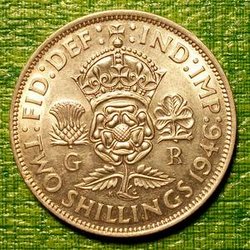 WOW, that is fascinating read including a wealth of information! How on earth did you gather all this? Not to speak of the seasoning with matching coins. Congrats to the great job and thank you for the pleasure reading it.

Thank you very much for this amazing (coin)story ! I once saw a mighty bronzemedal commemorating the 1. voyage of the Imperator. A quick glance through german Ebay shoes one , along with contemporary postcards. One year after RMS Titanic went down, the publics appetite for maritime triumphes truly was unbroken, now even with an aditional number of liveboats, as you tell. I did not know that. Really fascinating !
Grüsse, Mynter
Nach oben

And the year of 1913 was not only just another year but the year where Wilhelms silverjubilee and, equaly importent the Leipig- centennial where celebrated. For prussian coinage that ment the birth of the ever popular " Military Bust "- coinage, developed from the medall- like high relief of the comemmorial- series. In France they must have gone crazy. The defeat of Napoleon celebrated with a prussian eagle slaying a sneering french snake while the Emperor is dressing up. Some year to launch a ship by the name of " Imperator ". 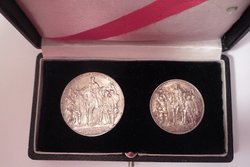 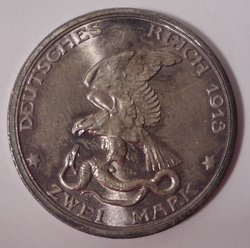 Am very glad to hear from you guys--two of my favorite coin-people--but have to wait to reply more fully (Monday morning's daylight will come too soon, I'm afraid). Tomorrow evening I hope.

Sedantag—had no idea about it and am glad to know of it. I’d like to make brief mention of it in my notebook (which means keying it to a coin). Maybe I could ask for just a little help?

(My German was elementary, and now it’s old too—and I never had a chance with Fraktur. So…)

About the 1911 “Historische Zeitungsannonce,” can the city in which this celebration was held be identified?

The information in the 1911 announcement that begins “Monday evening at 10:00, Big Brilliant Fireworks,” can someone please give me the next 6 lines? (Ending with “Kids free!”)


I liked this post. Been having a good time exploring it.

Among other things, I can see I missed a chance to really appreciate 1913 and the atmosphere that must have surrounded Imperator’s earliest days—and which magnified the pathos of her demise. The latter I guess I intentionally avoided—but I think I definitely missed some fun at the beginning.

(Maybe I would have done better if I’d have had that cased set of the 1913 commems. I know as unattended singles they’re relatively common coins, but that set…well, it has to make the mind run.)

About Imperator, I had started to play with one of the Silver Jubilee pieces, but once I saw the photos of it I was too unhappy to use it, and retreated to something more vanilla.

In my coin-notebook, however, which is just me talking to me, I tied the Silver Jubilee coin I had photographed to that (revised) entry, which now ends:

x: ….New Ambassador Gerard was given “a dinner of twenty-four covers, something of a record at sea.” I wonder if during his time aboard—perhaps even at his congratulatory dinner—anyone showed him a coin like this 1913a Prussian 3-mark celebrating the Kaiser’s Silver Jubilee? If not, I’ll bet he saw one soon enough; Face To Face With Kaiserism was also a book of his. (03) 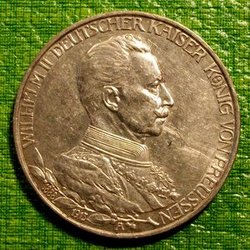 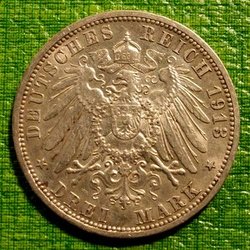 villa66 hat geschrieben: Sedantag—had no idea about it and am glad to know of it. I’d like to make brief mention of it in my notebook (which means keying it to a coin). Maybe I could ask for just a little help?


villa66 hat geschrieben:About the 1911 “Historische Zeitungsannonce,” can the city in which this celebration was held be identified?


villa66 hat geschrieben:The information in the 1911 announcement that begins “Monday evening at 10:00, Big Brilliant Fireworks,” can someone please give me the next 6 lines? (Ending with “Kids free!”)

Where and when you can buy a special slash/ribbon/band and the price.
Entrance fee festival ground: 20 Pfennig.
Nach oben

villa66 hat geschrieben:About the 1911 “Historische Zeitungsannonce,” can the city in which this celebration was held be identified?


villa66 hat geschrieben:The information in the 1911 announcement that begins “Monday evening at 10:00, Big Brilliant Fireworks,” can someone please give me the next 6 lines? (Ending with “Kids free!”)

Where and when you can buy a special slash/ribbon/band and the price.
Entrance fee festival ground: 20 Pfennig.

1. The sashes/ribbons...decorative only, or did they give special privileges?

villa66 hat geschrieben: 1. The sashes/ribbons...decorative only, or did they give special privileges?

Only free for ONE lady.
Villa66, so you had to pay for your lover!

Only free for ONE lady.
Villa66, so you had to pay for your lover!

I was on my second bite of breakfast when I read this--I started laughing so hard I about choked! And then I started imagining a guy trying to buy his sash and ribbon(s), and how he was fishing in his pocket for the right coin...if it was a 1-mark piece he was looking for, it was all good and he was okay, but if his fingers were fumbling around, looking for a 2-mark coin, there was going to be some trouble.

The mental image of those fingers gliding over that big silver eagle and the "ZWEI MARK" beneath it was just too, too clear--don't do it, dude!

Danke *EPI*, for the info, and for the laugh.