During the Great Depression of the 1930s, the U.S. government tried to spur economic activity by injecting money into public projects through the WPA (Work Projects Administration). Much of it was the customary type—roads, bridges, sidewalks, etc.

Less obvious was the WPA Writer’s Project, which produced a wonderful group of books called the American Guide Series. Together they form a deeply detailed portrait of the United States of America about 1940 or so.

Some of the detail the books contain is uncomfortable, like this note for the city of Baton Rouge, capital of Louisiana: “Theater and Motion Picture Houses: …9 motion picture houses (2 for negroes).”

But there is so much that has been preserved…“Swimming: Victory Park, Laurel and St. Anthony Sts., free; City Park, 15¢ before 6 p. m., 25¢ after.” And so on, for 746 narrowly-spaced pages in just this one member of the series, LOUISIANA: A Guide to the State.

So, a 1941s 25-cent piece (2-bits!)--price of an early evening swim at the Baton Rouge City Park, that last Louisiana summer before the war. 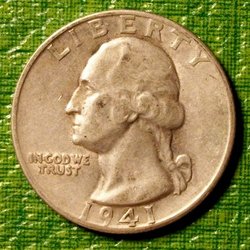 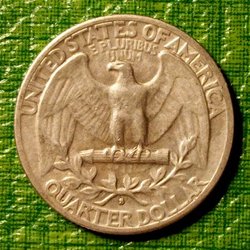 And this, below, from something I found in another section of the same Guide….

This worn Mexico City-mint 1807 2-reales (two-bits!) is certainly a much-traveled coin. I wonder if it might possibly have been in New Orleans (where it would have been a 25-cent piece) in September of 1817, ten years or so into its career?

If so, it could have been of help getting into an event a local handbill called “an extraordinary fight of Furious Animals...[in]…a rotunda of 160 feet in circumference, with a railing 17 feet in height, and a circular gallery well conditioned and strong, inspected by the Mayor and surveyors by him appointed. / 1st Fight—A strong Attakapas Bull, attacked and subdued by six of the strongest dogs in the country. / 2d Fight—Six Bull-dogs against a Canadian Bear. / 3d Fight—A beautiful Tiger against a Black Bear. / 4th Fight—Twelve dogs against a strong and furious Opelousas Bull….

“If the Tiger is not vanquished in his first fight with the bear, he will be sent alone against the last bull; and if the latter conquers all his enemies, several pieces of fire-works will be placed on his back, which will produce a very entertaining amusement…

“Admittance, one dollar for grown persons, and 50 cents for children.” Children? Four-bits for a kid…a pair of 2-reales like this one. 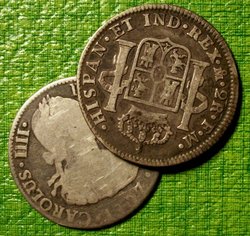 A happy newe year to you, villa, and thank you for this interesting glance into daily life amusement .
It stroke me that 25 cents for a swim seems to be considerably expensive , being in 1941. I remember that when I grew up in the 70s ,I could buy a daypass at our local pool for 70 pfennig, wich equaled half a Micky Mouse- magazine or 2 scoops of icecream (plus 10 pf of leftover lolly ).
What do you think an american boy in 1941 would have had to pay for ( a whole ) magazine and a nice portion of icecream ?
I wonder what facilities Victory Park would provide.
Grüsse, Mynter
Nach oben

And a Happy New Year to you and yours, Mynter! Sorry about the delay in replying…we’ve had a cute, so cute, and very energetic grandchild visiting.

You are right about the expensive swimming—good call. I need to look into ice cream prices c.1940, but I can say soda pop was a nickel (5-cents)—although I believe the bottles were only 6 or 8 ounces, versus today’s usual 12. Candy bars were a nickel, and comic books like Superman or Batman were a dime (10-cents). So the 25-cent to swim? High.

It seemed that way to me too, but when I was running through it, I thought maybe the contrast between the free swimming at Victory Park and the expensive swimming at City Park was possibly a way of segregating the pools by age, race, economic status, or all three.

I couldn’t find much more about Victory Park, but did confirm its name derived from WWI.

Swimming at City Park? Turns out that it was whites-only, in 1949, anyway, so a black recreational group built a swimming pool for the black citizens of Baton Rouge. (The state capital, for Chrissakes.) In 1963, an effort to desegregate the City Park pool failed. Instead the swimming pool was filled in.

I’d forgotten just how “deep south” the “Deep South” could be—in those days, economic winnowing like higher pool prices was unnecessary. Instead they could just plain say it, and make it stick: “No blacks allowed.”

So I think maybe the high price for the evening swim (after 6 p.m.) was likely just rational economics. My wife and I frequently mention how sorry we are that evening swims at area public pools are now mostly a thing of the past—too much cost for too few customers, and somewhat older customers at that, who don’t buy sodas and candy bars and potato chips as readily as their younger counterparts.

So I think the evening surcharge reflected the additional cost of operating the pool during those off-peak (and luxurious!) hours, but that’s just my own guess.

Thanks for the observation. Because of it I’ve learned—too many years after I should have—that swimming pools were major battlefields of the American war for civil rights. (Matter of fact, there’s a big private pool in a city near-by, a couple of streets over from my in-laws, that I’m just now wondering about—it just seemed like an odd thing to me, and as it happens, it dates from the early- to mid-60s...)

This is too long, but it’s something I love about coins—you start one place and sometimes you end up very far away. 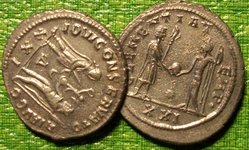 The image I intended to use was of the obverses--it was more to the point--but it was also too heavy to load. Finally cut it down.... 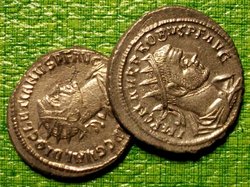