The study of trace-elements in archaeological metallic objects can
provide important clues about the metal provenance and the involved
manufacturing procedures, leading to important conclusions regarding the
commercial, cultural and religious exchanges between the antique
populations.
Ancient metallic materials are usually inhomogeneous on a scale of
20 microns or less: they contain remains of imperfect smelting, segregated phases in alloys, inclusions.
Due to their exceptional chemical stability, gold artifacts remain
essentially unchanged during weathering and aging processes.
Several fragments of ancient gold objects coming from an Eneolithical
treasury and from Pietroasa “Cloşca cu Puii de Aur” (“The Golden Brood Hen with Its Chickens”) hoard, unearthed on Romanian territory and two
Romanian native gold nuggets samples were analyzed using micro-PIXE
technique at the Rossendorf TANDETRON microbeam facility.
The purpose of the study was to clarify the metal provenance,
establishing if the hypothesis of local gold holds. To reach this goal, trace
elements (Cu, Te, Sn, Pb, Hg, As, Zr, Sb) and PGE (Platinum Group
Elements) concentrations were determined.
The presence of inclusions (micrometeric size areas of composition
different from the surroundings) was also checked. We found some Si, Ca, Fe ones on two Eneolithic samples, and a Ta-Cr one on a sample from Pietroasa hoard. The measurements led to conclusions regarding the alluvial origin of the gold for the Eneolithical samples and gave some indications for the possible gold ore sources of Pietroasa treasury, confirming the heterogeneity of this treasury (the two analyzed pieces belonged to different stylistic and compositional groups).

21 pieces of gold coins of KOSON type, considered the only kind of
gold coins issued by the Dacians, were analysed using EDXRF and PAA
(Proton Activation Analysis) methods at Bucharest Institute of Atomic
Physics facilities. For EDXRF, three annular excitation sources – Pu 238 (30 mCi), Am 241 (50 mCi) and Am 241 (10 mCi, with nickel window for
absorption of soft X-rays) and two X-ray detectors with Be window – a
Si(Li) and an HPGe were used. For PAA, each coin was irradiated in vacuum for 5 hours at an incident proton energy of 11 MeV at a current of ca. 50 nA at the 8 MV FN High Voltage Bucharest TANDEM and measured using a properly protected Ge(Li) gamma spectrometer. Three groups of coins of different composition were found, corresponding to simple, complex and no monogram pieces. The gold of Koson coins is not a natural one (electrum) from present Romania’s territory, but is similar to the gold of pseudo - Lysimachan staters. Some possible historical conclusions are discussed. 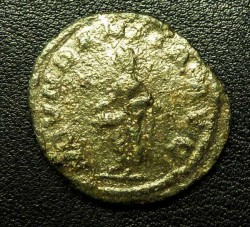 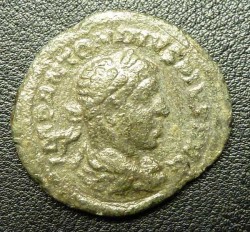 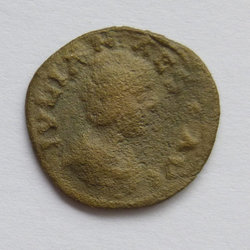 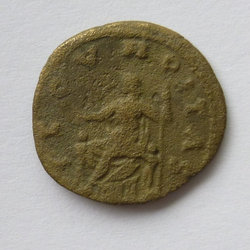