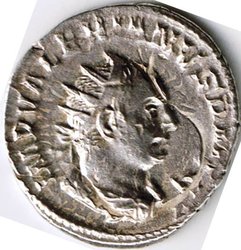 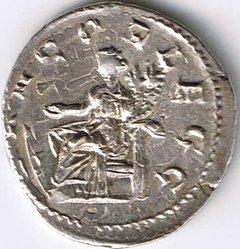 Isn't it astonishing that Valerian had access to die engravers of this quality during the first week or two of his reign, when he had not yet elevated Gallienus to be his co-emperor and had obviously not yet captured Rome, where in contrast Gallienus appears in the coinage from Valerian's very first issue on?
In my opinion there is only one possible explanation: these coins of Valerian are the continuation of the IMP C C issue of Gallus and Volusian, which accordingly must have been a branch mint staffed with engravers from the mint of Rome, set up to finance Valerian's campaign in Raetia and Germany. When Aemilian revolted and killed Gallus and Volusian, causing Valerian to proclaim himself emperor against Aemilian, naturally Valerian had immediate access to the branch mint that had been set up to support his expedition!
That mint, then, can quite definitely not have been Viminacium, which was the starting point of AEMILIAN'S revolt and was clearly still in Aemilian's hands when Valerian revolted in Raetia!
I ask myself, what moved Elmer to mislocate this mint at Viminacium, and why has this misattribution enjoyed such widespread acceptance for the past sixty years?

I'll speculate that one reason for assigning the coins to Viminacium was that IMP P LIC VALERIANO AVG is also seen on provincials from Dacia and from Viminacium, and perhaps that Viminacium seemed special for its provincial issue for Mariniana.

Good suggestion, Ed! The Viminacium bronzes are obviously related to the antoniniani of this series, with which they share three obv. legends, not only IMP P LIC VALERIANO AVG as on your two coins, but also IMP VALERIANVS P AVG and IMP GALLIENVS P AVG, AMNG 188, 190, 193.
This could have no geographical meaning at all: Viminacium simply copied these Raetian/Northern Italian antoniniani which may have circulated preferentially in all of the Danube provinces since their mint was nearer than Rome.
On the other hand, my argument that the antoninianus mint cannot originally have been at Viminacium does not exclude the possibility that Valerian might have transferred it there after defeating Aemilian!
However, we need firm proof for the location of this mint, not just an assertion or an unreliable deduction such as "The obv. legends of the bronzes are the same, so the antoninianus mint must have been transferred there." Especially since Elmer based a major historical conclusion on the supposed location of this mint at Viminacium: that Gallienus campaigned on the DANUBE for a couple of years before transferring both his activities and the mint to Gaul and the Rhine!
Nach oben