According to Dr Theron (Reference: Tokens of Southern Africa and Their History):
"The farm, Alexandersfontein, 9 kilometers from Kimberley, at one time Belonged to the" London and South Africa Exploration Company. "
This Company's assets including a hotel which was already mentioned in 1885, was taken over by the De Beers Consolidated Mines. A plan for a new hotel existed in 1893, and in 1897 De Beers contemplated enlarging the existing hotel, but this had to be postponed because of the outbreak of hostilities and fighting around Kimberley during the Anglo-Boer War.
When peace came the Alexandersfontein Hotel and Kimberley were linked by an electric tram route run by the "Kimberley and Alexandersfontein Electric Railway Company." This was completed in 1904. The usual return fare from Kimberley to the hotel was 1 / -, but on Saturdays it was a 6 d only. Enlargements to the hotel also were carried out and completed in 1908.
Difficult times hit the hotel and in 1916 and then later, it had to be closed for varying periods, until in 1939 the end came for the hotel as such, when World War II broke out. Some furniture was sent to a Kimberley auctioneer on 11 December 1939, and the hotel was offered to the South African Defense Force, which accepted it.
Eventually in 1950 the building became government property. It is now the "Danie Theron Krygskool" which was started on 10 October 1968. On 9 June 1969, De Beers Company, handed over to the school used the old tram between the hotel and Kimberley "

The reverse side of these tokens is the same as that of the "R. Hovenden & Sons' barber checks. 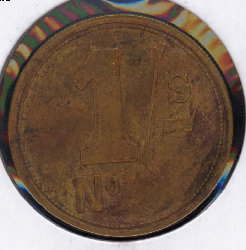 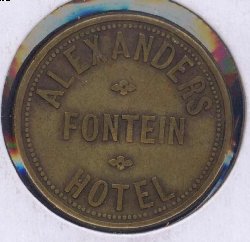 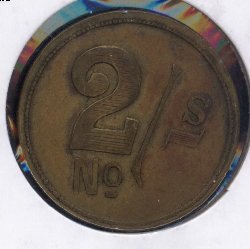 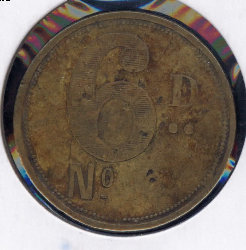 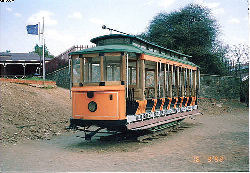 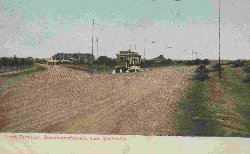 first of all a warmly welcome to this forum. Secondly, thank you very much indeed for the posting as to Alexandersfontein Hotel at Kimberley. This was a thrilling story, illustrated by images of coins and old postcards. As a collector of African tokens I am desperate to read more of your postings.

If I am not too wrong, those tokens of Alexandersfontein Hotel are listed in the "old" Handbook of Brian Hern (issued 2004) as Nos. 10a - 10d. In the book of Dr. Theron, you mentioned, I found the story with No. C53. Unfortunately, I don't have any of those pieces yet. But sometimes it will click.

By another thread at this site you told us that there will be a new issue of Brians Handbook. Hopefully, I will get a copy somehow. Maybe by you, Brian or Pat. I am happy to be connected with some token collectors of the South.

The History of Lace Diamond Mine
Lace Mine (Crown or mine) is Located 20 km North of Kroonstad. The Lace Mining Company was originally started by Colonel John Dale Lace in 1899. John Dale Lace (27 November 1859 - 5 June 1937) was born in Port St Mary on the Isle of Man He was twice married to Josephine Cornelia Brink (10 April 1869 - 14 May 1937) from Richmond in the Karoo.
John was a broker in mining, finance and property and a wealthy man. He was involved in the Jameson raid in 1895 in Johannesburg (an effort by the wealthy mine owners to overthrow the Kruger government). He got off lightly with a 2.000 pound fine.
For seven years (upto 1911) Laces were the owners of one of Johannesburg's most prominent historic landmarks, the Parktown mansion 'Northwards', designed by British architect Herbert Baker in 1904. Josephine became a flamboyant Johannesburg socialite who was often seen in a carriage drawn by a team of four zebras.
John and Josephine never had children of their own. However, Josephine is known to have been the mistress of Ernest Beckett, 2nd Baron Grimthorpe, with whom she had a son. Although Josephine truly loved Ernest he refused to marry her.
The depressed conditions after the Anglo Boer War, combined with Josephine's extravagant lifestyle, forced John to dispose of the mine in November 1908. Further misfortune followed in 1911, when a fire at 'Northwards' forced to sell the Laces and relocate to their farm, Boschkop - living a more economical and modest lifestyle. The History of John and Josephine Dale Lace is well documented in the biographical sketch "Bird of Paradise" by Daphne Saul, published in 1986.
The London-listed Crown Diamond Mining and Exploration Company took over the Lace Mine and were able to produce 800.000 carats from Opencast and underground mining operations between 1908 and 1930th During this time (about 1912), the mine officially changed its name from Crown Lace mine to mine.
In 1930, diamond prices had collapsed with the worldwide economic depression and by 1931 the mine was put on care and maintenance. Part of the care and maintenance involved ongoing dewatering of the underground operation. Respectively in 1931, the maximum depth of the open pit and the underground operations was approximately 100 meters and 240 meters.
By 1939, with the outbreak of the Second World War, Crown could no longer afford to continue with its ongoing care and maintenance program, and sold the mine to De Beers. Following the sale, it is presumed that De Beers changed the name of the mine from back to Crown Lace. De Beers owned Lace mine for 75 years without ever bringing the mine back into production. With the introduction of the new minerals legislation, De Beers sold the mine to the Christiaan Potgieter Trust (1996), who subsequently sold the mine to Diamondcorp in 2005.

The tokens are thought to have been used between 1899 and 1912 (and perhaps even upto 1930). These tokens are extremely rare.

The Future of Lace Diamond Mine
Mining operations at Lace Mine started again in 2008. Diamondcorp estimate that the mine has a reserve of more than 13-million carats, over a life of mine of 20 years or more. An exciting prospect for the mine is the possibility of mining large carat colored diamonds especially the "Lace" Lilacs which are intense purplish-pink diamonds (Reference: Mining Weekly, 4 April 2008). 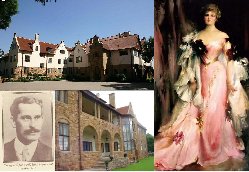 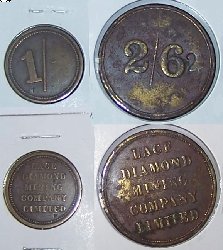 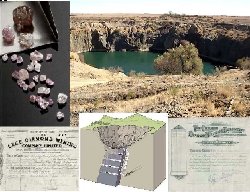 History of Voorspoed Diamond Mine
(reference: "A Heritage Impact Assessment (HIA) Study for an EMP for the Voorspoed Diamond Mine near Kroonstad in the Free State Province of South Africa, JCC Pistorius, September 2004).
Voorspoed Mine is located 30 km North of Kroonstad. The kimberlite pipe on the farm Voorspoed was discovered and proclaimed by HSHager (a geologist and prospector) on 28th November 1906 (Proclamation No.34 of 1906 by the Acting Lt. Govender of the Orange Free State). The mine was worked on an extensive scale by the Voorspoed Diamond Mining Company Limited. for about five and a years before it was closed on the grounds that it was not deemed profitable enough help.
Near the surface, where the 'yellow soil' had been enriched by natural concentration, mining proved highly profitable, but below the 40 feet (13.5 m) level, there was a marked drop in yield because of the extremely hard kimberlite - from 1910 onwards operations were conducted at a loss. Opencast mining operations at Voorspoed yielded a total of 897,814 carats. No records of large, good quality diamonds from the mine could be found. The mine was eventually closed down on 3 August 1912 and sold to De Beers.
De Beers acquired the property on the following terms: a payment of 20,000 pounds in cash, taking over the debt owed (as from 1 July 1912) Voorspoed by the Company, and the purchasing company shares at 405,704 existing 12s 6d. The company shares were purchased over a period time, accumulating interest at a rate of 4.5% per annum from January 1913 until the date of payment.
De Beers had no intention of working the mine, declaring it to be unprofitable, although the officials of the Union Mines Department were of the opinion that the mine was worth exploiting. In 1914, a commission of inquiry was appointed by the Union Mines Department to investigate whether or not a closure was justified. The findings of the inquiry, published in April 1914, were that to continue mining operations would result in a substantial loss to De Beers. Under De Beers' ownership, the mine Remained closed for the next 95 years (upto 2007, when re-commissioning of the mine commenced).

Study at Heritage Voorspoed Diamond Mine
(reference: "A Heritage Impact Assessment (HIA) Study for an EMP for the Voorspoed Diamond Mine near Kroonstad in the Free State Province of South Africa, JCC Pistorius, September 2004).
As part of the re-commissioning process, De Beers were required to complete on Environmental Impact Assessment (including a heritage study of the area). According to the heritage study there is an old graveyard and an old dilapidated building on the Voorspoed property that dates back to the time of the mine.
The old graveyard located 2 km to the west of the open pit has the following graves:
• Cornelis Christoffel Bothma, 26 March 1835 to 26 October 1894th
• Johanna Catharina Maria Bothma (nee Nel), 26 February 1888 to 19 December 1911th
• Martha THP van den Heever, 1905 - (unknown).
• Susanna Jacoba Meintjies, 29 October 1902 to 30 October 1910th
• Hendrina Christina Morkel, 6 August 1910 to 27 October 1910th

The old dilapidated building, oblong in shape, contains two rows of six rooms under a pitched corrugated iron roof and is located 200 m to the west of the open pit. The lower foundation wall of the building was constructed using dressed dolerite, while the walls were built using red clay bricks and cement. The floor is cement (concrete) and the window frames and panes were made of wood. The ceiling was made of wooden planks. The purpose of the building is unknown.

The Voorspoed tokens are struck roughly and often off-center. These tokens are not too scarce.

Attached Images
1) A set of Voorspoed tokens.
2) The open pit and one of the waste rock dumps at Voorspoed.
3) The old building at Voorspoed. 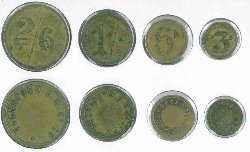 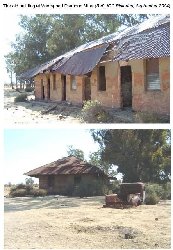 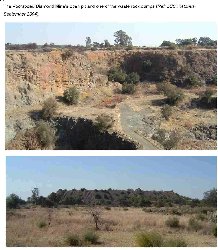 Thanx for these postings from another collector, who is addicted to African coins and tokens. 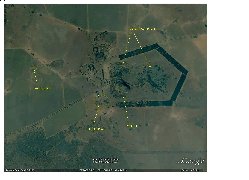 History of Koffiefontein Diamond Mine
In June 1870, a diamond was discovered near a popular stop-off point for transport riders, Koffiefontein - named after the nearby fountain and the customary practice of making coffee at the stop-off point (Reference: Mark Smith, www.on-the-rand.co.uk).
The resultant diamond rush, led to the startup of the Koffiefontein (or Koffyfontein) Mine, approximately 80 km South of Kimberley. The Koffiefontein miner's camp was first proclaimed a town - Koffiefontein - in 1892. The mine was worked extensively until the end of the 19th century. Thereafter, like with so many other diamond mines, mining proved unprofitable at greater depths. The diamond deposit of Koffiefontein was known to produce poor yields, but the clarity of the diamonds mined was very good.
The mine was taken over by De Beers in 1911 and later closed in 1932 as a result of the Great Depression. Koffiefontein mine shut down until 1971. It was reopened for a period of ten years between 1972 and 1982. Underground mine development started in the 1980's and mining from the Koffiefontein pit was halted.
During World War II, Koffiefontein served as a POW (Prisoner Of) camp for about 2000 italian soldiers. About 800 per-Nazi South Africans were also detained in the town. [Fiber tokens were struck by the South African Mint in 1941 for use in the POW camp ( "Union interment camp")]. 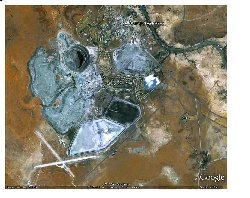 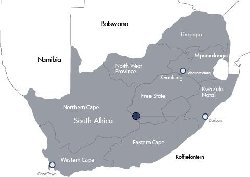 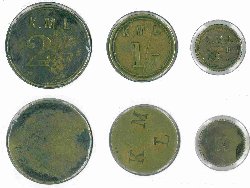 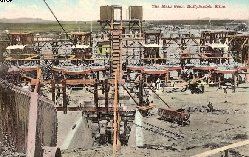 I have one of these tokens hexangonal numbered "203" for Imperial. Harbor Building Authority (the Swakopmund Harbor Construction Office).

Can somebody please provide me with the text relating to this token from Schimmel "German Tokens, Part 2" since I do not have a copy.

Any other information regarding this token would be greatly appreciated. 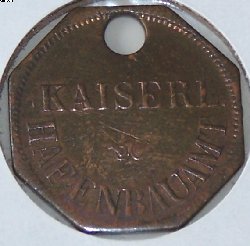 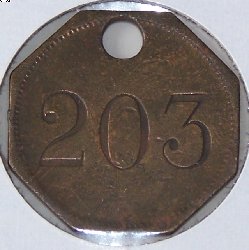 Thank you JSalgado. I also recieved further information stating that "this is a workman' identity pass used during the construction of the port at Swakopmund in 1902-03".
Nach oben
11 Beiträge • Seite 1 von 1