Understanding popular Latin of Roman Hispania through graffiti on pottery 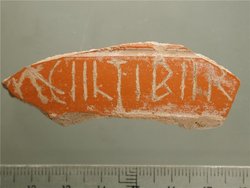 Researchers are studying the popular Latin of Roman Hispania through the graffiti found on 'terra sigillata' ceramic ware. As part of this approach, analyses of the graffiti kept in the Spanish Royal Academy of History have just been started. 'Research focuses on the words written on the surface of these everyday ceramic pieces which can provide linguistic data, but also territorial and ethnological information', says the author of the work.

The Regional History Museum in the eastern Bulgarian city of Sliven has received from the police and judicial authorities a total of 386 coins and other archaeological artifacts from different archaeological periods which have been confiscated from now sentenced treasure hunters.

The confiscated archaeological items turned over to the Sliven Regional Museum of History have been used as evidence in the trial of two treasure hunters, Rumen Ivanov and Kiril Zhelev, found guilty by the Sliven District Court, whose sentence has now been confirmed by the Appellate Court in the Black Sea city of Burgas, the Appellate Court press service has announced. 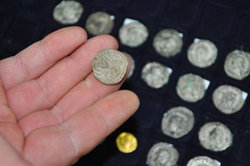 Zhelev and Ivanov, who found the artifacts during illegal treasure hunting excavations at archaeological sites in Bulgaria, were arrested by the Bulgarian police in April 2012 at a gas station diner while they were meeting with a third man to negotiate a sale. “We want to direct [the public’s] attention to what is positive, to the fact that we are fighting treasure hunting crime together,” Nikolay Sirakov, Director of the Sliven Regional Museum of History, is quoted as saying.

Treasure hunting and illegal trafficking of antiques have been rampant in Bulgaria after the collapse of the communism regime in 1989 (and allegedly before that). Estimates vary but some consider this the second most profitable activity for the Bulgarian mafia after drug trafficking. One recent estimate suggests its annual turnover amounts to BGN 500 million (app. EUR 260 million), and estimates of the number of those involved range from about 5 000 to 200 000 – 300 000, the vast majority of whom are impoverished low-level diggers.

An Ancient Roman and Ancient Thracian mask helmet, which was stolen from the Museum of Archaeology in the southern Bulgarian city of Plovdiv back in 1995, has now been returned, Bulgaria’s Prosecutor’s Office has announced. The mask helmet, which is dated to the 1st century AD, was discovered in 1905 during archaeological excavations in a burial mound in the Kamenitsa Quarter in the city of Plovdiv. 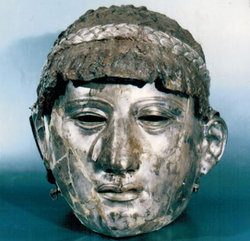 The extremely rare artifact was stolen in an armed robbery of the Plovdiv Museum of Archaeology exactly 20 years ago – in April 1995. Back then, two armed men attacked the museum shooting and wounding a security guard.

The Bulgarian Prosecutor’s Office does not reveal where exactly the archaeological artifact was found after it had been missing for 20 years. After it was stolen, the silver mask helmet vanished with no trace; there had been rumors, however, that it had ended in the antique collection of a collector from Switzerland.

Most probably, the Ancient Roman and Thracian artifact has now been returned from abroad since a huge number of Bulgarian archaeological artifacts discovered by treasure hunters end up exported illegally, and sold to rich collectors in Western Europe, North America, Japan, or the Arab World.