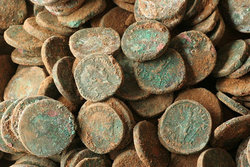 Archaeologists have unearthed a cache of ancient Roman silver and bronze coins as well as other treasures in the ruins of a 1,700-year-old villa on the coast of Libya.
The team discovered the haul of 553 silver and bronze coins known as sterercii (Anm. sestertii) in the remarkably well-preserved 3rd century building in the ancient city of Ptolemais, Haaretz reported.
The settlement on the North African coast was a key trading port in the Ptolemaic Empire and lies in the eastern corner of modern day Libya just over 60 miles from the city of Benghazi.

A hoard of coins dating from the final days of the Roman Empire has been found in an orchard in Gelderland. Experts believe the fortune was buried by a Frankish military leader in the second half of the fifth century, when the area was part of the Western Roman Empire, which collapsed in 476AD. Some of the 41 gold pieces unearthed in Lienden, near Veenendaal, bear the image of Majorian, one of the empire’s last rulers, who reigned for four years from 457. ‘On that basis we think this treasure was buried in around 460,’ said Nico Roymans, professor of archaeology at the Vrije Universiteit in Amsterdam.

A new cache of well-preserved Roman writing tablets, some of whose contents have already been deciphered, has been discovered at the Roman fort of Vindolanda. 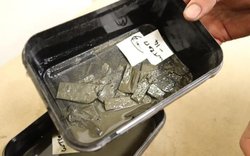 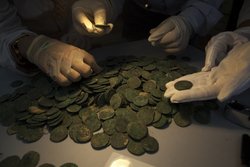 The discovery is of "incalculable value and a milestone in the archeology of this mining area," according to the archeologists from Atalaya Mining, the company running the mine who found it. The discovery was reported by local newspaper Huelva Informacion. The 40 or 50 coins found, which date from the 2nd century AD, according to a report in La Informacion, are said to be from the era of Nero and Trajan. "It is a discovery of great beauty that comes to contribute data to our knowledge of RioTinto, that was the great mine of the Roman Empire," Luis Iglesias, director of archeology at Atalaya Mining, told El Pais.

Experts believe the owner of the coins would have been an influential resident of the ancient Roman settlement of Orium. The coins were found bunched together because they would probably have been held in a leather purse before, according to the archeologists who found them. The find has helped archeologists and historians establish that the city of Urium, on the site of the modern city of Huelva, stretched further west than previously known.

Archeologists discovered the coins as they were placing a metal sheet to protect a site that has already been identified as an area rich in Roman remains. The excavations are being funded by the local province and led by Juan Aurelio Pérez Macías, from the University of Huelva, according to El Pais. The find adds to the discovery of 600 Roman coins in Sevilla in April 2016. The latest haul of found coins will remain provisionally on display at the Mining Museum in Minas de RioTinto until a permanent place for them is established.
mit freundlichem Gruß