Bulgaria’s law enforcement agencies have confiscated a cache of archaeological finds, including gold artefacts dating back to the third millennium BCE, which were handed over to the National Museum of History in Sofia on April 14.

The three unique golden necklaces, made of as many as 15 000 individual pieces, is thought to be the second oldest golden treasure dug out in Bulgaria (only the items found in the Varna necropolis, dating back to the mid-fifth millennium BCE, which are among the oldest samples of golden artefacts in the world, are older).

The other items seized by the State Agency for National Security (SANS) include a marble slab with a relief of the Thracian horseman, dating to the second or third century CE, two artillery guns and about 100 coins and items dating from antiquity to the Middle Ages.

Details of the bust are scarce, with SANS declining to give any details because the investigation is ongoing. However, Bulgaria’s Culture Ministry said in a statement that two people were detained and one was facing charges.

Archaeological finds are considered state property in Bulgaria, but illegal treasure-hunting remains a lucrative industry, given the long history of human habitation in Bulgaria – going back to the Neolithic, through Thracian and Roman sites, as well as a rich medieval history pre-Ottoman conquest.

National Museum of History director Bozhidar Dimitrov estimated that the golden necklaces alone could have fetched a price of up to five million euro from private collectors.

“This historical value of this treasure is exceptional, because it dates to the third millennium BCE, a time during which we have no marks of high civilisation in Bulgarian lands. The three necklaces, all from the same necropolis, were likely worn by high-born women,” Dimitrov said, as quoted by Focus news agency.

Unique samples were among the 250 ancient coins found in Bornholm. After hours of searching through the mud with metal detectors, amateur archaeologists Frank Pelle and Bent Gregersen made the discovery of their lives on a ploughed field in Bornholm earlier in April. The two lucky gold-diggers found an ancient Viking gold treasure hidden in the ground. "It was an amazing feeling, for we had searched for hundreds of hours without luck," Pelle told Ekstra Bladet. After studying x-rays of collected earth samples, Bornholms Museum, the local archaeological museum, estimated that the treasure of 250 gold and silver coins was buried in the ground in the 1080s.

A Roman hoard from the end of empire

Dutch archaeologists have recently completed the rescue excavation of a unique treasure hoard dating to the beginning of the 5th century AD, from a field in Limburg. The hoard partially consists of a combination of gold coins and pieces of silver tableware which had been deliberately cut up (hacksilver). 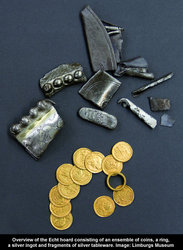 The complete hoard was shown at a press conference on Friday, April 25 in Limburg Museum (Venlo) where archaeologists highlighted the significance of the find as a key piece of evidence for our understanding of the final phase of Roman rule in the Netherlands, around the year AD 411. Placing the treasure into perspective within the political and military chaos at the time, why was the precious and richly decorated Roman silver tableware cut into pieces and buried?