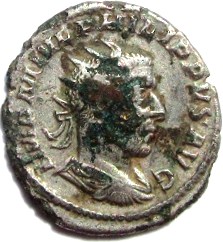 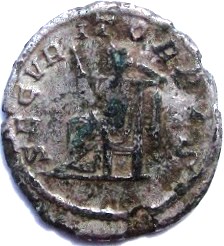 In Philip I's final two issues, those that bear first Latin and then Greek officina letters on the antoniniani, only a few middle bronze types are recorded, all very rare. This NOBILITAS dupondius in particular is apparently only the third or fourth specimen recorded. R. Bland, in his tour of seven major European museums and the ANS, found only one specimen of this dupondius, namely the one in Paris described by Cohen. Only one further specimen, CNG 63, 21 May 2003, lot 1501, seems to have appeared in an illustrated auction catalogue. The Wiczay catalogue of 1814, no. 2621, also describes a specimen, which might be the same as the Paris or CNG piece, or another, third, specimen. Ours, which is from the same die pair as the CNG specimen, is thus apparently only the third or fourth such dupondius recorded. Since it was acquired in Turkey about fifty years ago, covered in heavy deposits which we have removed, our coin can hardly be identical with the Wiczay example.