Baltimore’s Inner Harbor is home to the 1854 sloop-of-war Constellation, although for a long time it wasn’t wise to say so in Baltimore, where most folks continued to insist that what they had was the 1797 frigate Constellation.

Today, however, the ship’s 1854 origin is well-recognized. The confusion began deliberately, it seems. Congress had refused the Navy money to pay for new construction, and appropriated money only to repair existing ships. So the old frigate Constellation of 1797 went in for “repairs,” but according to the experts that I’ve read—and whose verdict has now been amply confirmed—the ship that emerged was a new sloop-of-war, the Constellation of 1854.

This medallic token carries a date of 1797 and may well—as it proclaims—contain copper from the original Constellation. (The copper bars and spikes used were said to have been dated well before 1854.) These tokens were struck about 1959 and sold for a dollar each to raise money for the ship’s rehabilitation.

But what makes them into tokens, usable as money?

They “provide lifetime free admission to the [ Constellation ] for the fortunate owners.” So says the accompanying paperwork—and I’ve called and confirmed (2014) that they are still being honored. 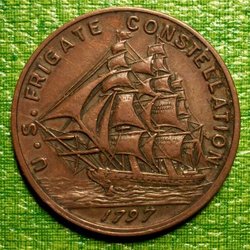 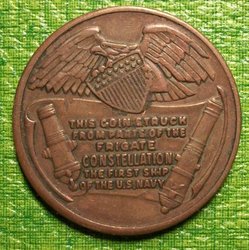