Richard Abdy vom BM brachte es auf den Punkt:
"Off the top of my head I suspect it was a figment of Harold Mattingly’s imagination (I hope I’m not taking his name in vain – could be one of his contemporaries in the early to mid-century, e.g. maybe Mattingly mooted the ideas and R. A. G. Carson ran with them – I think Carson was the one that confidently proclaimed denarius minting returned to Rome from Lyon under Caligula when modern metallurgy now shows the move was part of Nero’s mint reforms of AD 64). The three largest mint centres of silver coinage in the east were Cappadocia in Caesarea, Antioch and Alexandria. Alex is very easy to recognise when they produce Roman format denarii as their style is so distinct (they have protuberant eyes like the Garfield cartoon characters!). The bilingual pieces of Pescennius Niger link Latin-legend obverses of the style Mattingly described under the Severans as ‘Emesa’ with their Greek legend reverses (some with the typical design of their holy mountain Argeus amongst others). As for the bulk of Niger’s denarii – that was agreed as Antioch (his capital). So the denarius mints in the East at the dawn of the Severan period seem quite straightforward now.
See: https://www.forumancientcoins.com/histo ... r14110.htm The problem comes with the Mattingly / Carson mentality to weave coins into history more than the evidence can support it. Thus the Niger-supporting cites (such as Antioch) as we all know were subsequently disgraced and degraded in status – so surely the mints must have been transferred to the new political capitals? Well there isn’t any corroborating evidence so it seems silly to build ‘facts’ on such supposition. It’s a good lesson to learn not to get creative with the evidence – no matter how tempting! (Thus nowadays one might say ‘minted in Syria’ to be on the safe side.) A good place to confirm my unreliable memory is Kevin Butcher’s book: Coinage in Roman Syria". (Cited from: https://www.cointalk.com/threads/domna- ... ry.324625/).
Da ist alles dazu gesagt. 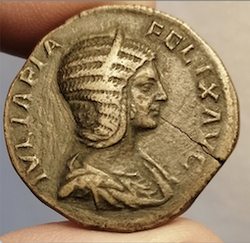 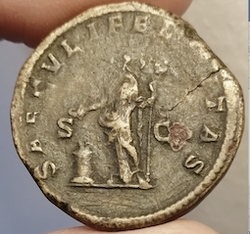