One last notebook entry from Edward's book before I put it away, accompanied by a piece of that superb (whitish) copper-nickel the British were producing in the early-1950s. I wonder what they were doing...maybe giving the planchets some sort of special treatment? Anyway...

x: A 1951 half-crown that was one of the coins and banknotes chased by a book from that year, A King's Story: The Memoirs of H.R.H. the Duke of Windsor K.G..

The United Kingdom was celebrating in 1951, and hope was widespread that the Festival of Britain would mark the end of the country’s tough postwar. But Edward’s memoir—as memoirs often are—was more wistful than optimistic.

Wrote the former prince, remembering himself as a young man: “At twenty-five this world, which to-day seems so vexatious, looked pleasant enough to a young Prince without too many cares, and with a battle-cruiser to take him around the world.” (92) 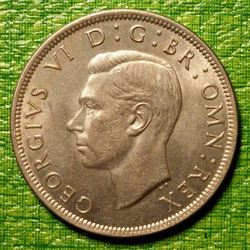