I’ve been looking again at the Louisiana entry in the Depression-era WPA (Work Projects Administration) American Guide Series. From the chronology near the back of the book…

New Orleans was growing like Topsy anyway, and oil had been discovered in Louisiana the year before. Silver dollars were falling like rain from the coin presses of the New Orleans Mint (60,180,000 from 1896 through 1902). So it seems certain that images like the one below must have figured prominently in the thoughts and conversations of the New Orleans streetcar men, who were striking for a minimum wage of $2 (8 x 25¢) a day.

Two dollars a day. A nice round number, and easy to picture… 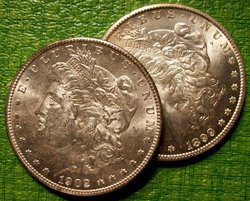 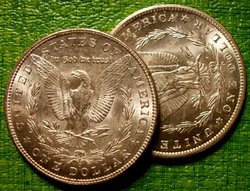 But the strike failed and the New Orleans streetcar men and their families were disappointed.

And even a booming big city like New Orleans couldn’t absorb all those silver dollars. So they were dumped wholesale into canvas bags and taken to the government’s vaults, where they stayed.

Some 270 million silver dollars were melted pursuant to the Pittman Act of 1918, and another 52(?) million fell victim to the Silver Act of 1942. No date or mint records of the melted coins were kept, so it took some time to sort things out.

The coin at left in the photo, the New Orleans-mint 1902o, for instance. It was once thought to be very scarce. Before, that is, the Treasury’s hoard was dispersed in the early-1960s. Now? Well let’s just say that this 1902o dollar was a far bigger item sixty years ago than it is today.