Not a pretty coin, but an interesting one. A small (15mm, 1.35g), not-so-common coin that likely saw a lot of confusion—and poverty—during its circulating career.

Mexico’s short-lived Second Empire—with its ill-starred Emperor Maximillian—was set up by the French (with local help) in 1863. Mexico got its first real decimal coinage the next year, with this 1864m 5-centavo being the smallest silver coin in the new series. (Note the similarity of its obverse to the coins of Iturbide’s First Mexican Empire, but note also the reverse, which looks…well, French.)

The American Civil War would end in 1865, the French army would depart in 1866, and Maximillian would be executed in 1867. Mexican government would return to Mexican hands, and the Republic would resume.

This 1864m 5-centavo would remain at work throughout, and if its worn condition is any guide, Maximillian’s coinage circulated (I’d bet) until the debut of the Estados Unidos coinage of 1905—maybe later, in some parts of the country.

But if his coins long outlasted the Emperor, I’d be very surprised if they outlasted the Empress. Carlota died in Belgium in 1927, nearly 60 years after that firing squad ended her husband’s life. 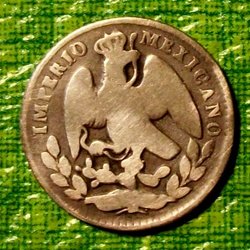 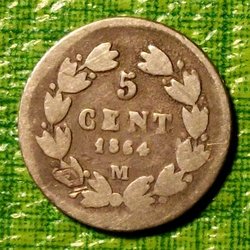