Between-the-wars. This 1932 5-centesimo piece was coned at the American mother-mint in Philadelphia and shipped south to Panama, site of what was then perhaps the United States’ most prized overseas possession—the Panama Canal. Certainly it was at the center of American defensive planning.

The Japanese had renewed their depredations in China in ’31, so by 1932, War Plan “Orange” (for war with Japan) was being dusted off and updated. But not only “Orange.” As this 1932 5-centesimos was being delivered to Panama, the Canal there was a linchpin of War Plan “Red-Orange.”

“Red-Orange” addressed what was then—in those long-ago days before atomic bombs and intercontinental bombers—the ultimate nightmare of American defense planners…simultaneous war with the Japanese and British Empires. Against a combined assault by these two dominant naval powers, the Americans would have to be able to transfer their ships from the Atlantic to the Pacific, and vice-versa, quickly. But even then….American chances were not good.

Still, it was only 1932. War Plans “Orange” and “Red-Orange” would prove useful, but that was years away. It was the here and now of 1932 that demanded American attention. This Panamanian 5-centesimos was struck on a planchet that could have been used to coin a 1932 Buffalo nickel. But there were no new nickels in 1932, Buffalo or otherwise. They weren’t needed. Too many Americans were broke.

Early in 1932, many thousands of Depression-weary WWI veterans marched to Washington D.C. to demand the early payment of their military service bonuses. They set up tents and shacks and stayed, many with their families. But the “Bonus Army” didn’t get its money. Instead, the marchers were driven out and their encampments broken up and burned.

It was War Plan “White”—prepared in case of domestic insurrection—that was used, in part, against some thousands of American WWI veterans in 1932, between-the-wars. 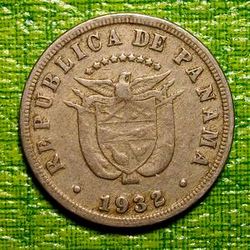 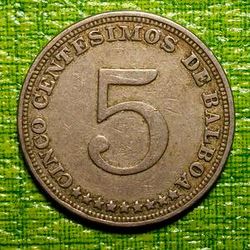