Digging for cash at Hagia Sophia

Digging for cash at Hagia Sophia

My eyes were a lot better 20+ years ago, or maybe I had a lot more imagination—or both—but back then I had the nerve to identify the coin below as an example of Sear 159. Weighs 17.85 grams, with a diameter of 30.3 mm.

(Any corrections, as always, are most welcome.)

Justinian I—Justinian the Great—coined this large (but tired) copper follis at Constantinople sometime during his reign from 527AD to 565AD. As it depicts his bust in profile, it likely is from the earlier part of his reign. It could possibly be one of the coins about which Newsweek Book Division’s Hagia Sophia is talking when it says the following about the construction of the famous old church, which was building from 532AD: “To encourage the workmen, a heap of coins was mixed with the earth each day, and in the evening when work was done they were allowed to forage for them, digging for what they could find.” 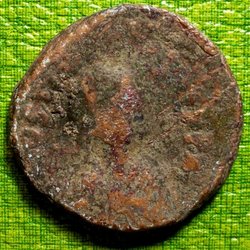 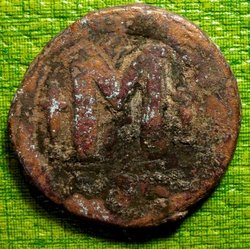 Re: Digging for cash at Hagia Sophia

Not around during the Hagia Sophia's construction, but in time for one of its earliest collection-plates, maybe...

What I think is a big copper follis of Justinian I, Sear 163, coined at Constantinople in a year corresponding to 539-540AD. 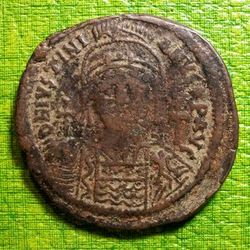 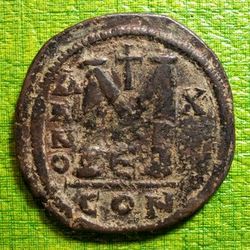