The big silver dollars at the gaming tables in Las Vegas were often casualties of souvenir-hunting visitors, especially after the end of most American silver coinage in 1964-5.

One of the earlier of the dollar-size tokens struck to compensate for their loss was this brass piece produced about 1966 for Milton Prell’s Aladdin Hotel. Prell owned the Aladdin only from January ‘66 until not long after his stroke in 1968, but during that period—1 May 1967—Elvis and Priscilla were married there.

I wonder, was this token anywhere nearby? 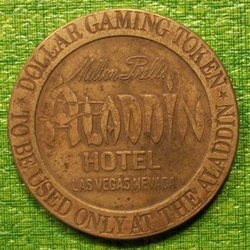 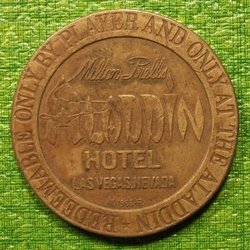