Knowing the iconic status of the Silberadler of 1951-74, as well as its certain value as a symbol of German recovery, still I post this additional perspective on the coin—welcoming any comment or criticism.

With the issue of this new-type 1975f 5DM, the scrawny eagle of a struggling postwar Germany was replaced by the plump bird of the prosperous Bundesrepublik.

Had never before regarded the strange eagle of the previous type 5DM as a perhaps subliminal symbol of distress until one day I asked a German friend about the breakfast “snack” I was seeing in the kiosks: a large roll sliced and thickly buttered on both halves, with a slab of chocolate and a slice of white cheese in between.

She said it was an older dish, one which she had been told had grown out of the “slim” postwar years. 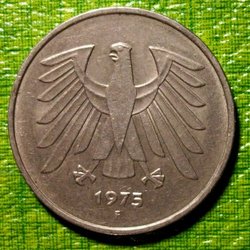 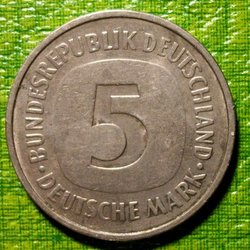