William McKinley was inaugurated in March the year this 1901o dollar was coined (and assassinated that September at the Pan-American Exposition).

The year before, McKinley had used the campaign slogan of “the full dinner pail” to beat challenger William Jennings Bryan for a second time. It was a confirmation of the victory of a mono-metallic gold standard over bimetallism, and so I suppose the Morgans of this date mark a departure of sorts for the old silver dollar—from this moment forward it was clearly a token coin only.

Most of these 1901o Morgans went into storage, however. By the time they emerged from the Treasury vaults, American popular culture would be intertwined with several of the people born in 1901—Clark Gable, Marlene Dietrich, Gary Cooper, Louis Armstrong, and Walt Disney, to name a few.

And another person is born in 1901 who will figure in the Morgan’s story—Enrico Fermi. The Manhattan Project (to which Fermi is so important) will employ silver from melted Morgans during WWII. 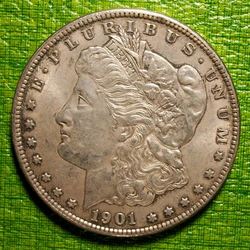 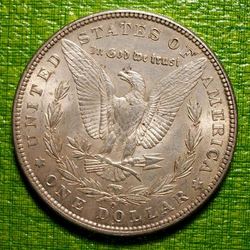