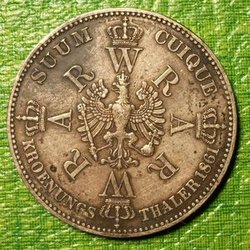 This Kroenungsthaler, of course, is actually a species of Vereinsthaler. Vereinsthalers provided a bridge between the coinage of the old German states and cities, and that of the new Imperial Germany, circulating until they were withdrawn and demonetized to make way for the newly-introduced 3-mark coin of 1908.

But the really fun thing about this coin (for me, anyway) is this pronounced die crack affecting the obverse portraits:

Die cracks—especially prominent die cracks like this one—are sometimes taken as omens or as harbingers of death, or disaster.

That thought (die cracks as omens) passed through my mind as I was looking at this Prussian thaler, and I found myself chuckling. I mean, here’s a guy (Wilhelm) who lived a very long life, full of worldly accomplishments, had married only the one time and had fathered two worthwhile children, had enjoyed the pleasure of humbling in his old age the foreign enemy of his youth, and who, at his death, was the popular ruler of one of the world’s fastest rising countries—a country he had played an important part in assembling.

But then the die crack does afflict both portraits. And the marriage of Wilhelm and Augusta was not a happy one. Their daughter became Grand Duchess of a German state that challenged Prussia during the Austro-Prussian War, and their son…now there (in the familiar story of their son Friedrich’s early death on the Imperial throne), now there may be a real tragedy.

So maybe the die crack on this 1861 Kroenungsthaler is a bad omen after all. Or maybe not. Maybe it’s only a die crack in search of a story.

Can you show close ups?
Thank you for another pleasant and well founded contemplation,
it's always fun reading them.
Sigi

Here's a picture closer in, of the right-most portion of the die crack. Or are you thinking that maybe this is some other kind of problem? (I considered a "struck-through error, but then decided not.)

Ah - yes, I can see that horizontal line now. And others will, too, hopefully.
I am not familiar with German coins but I enjoy your postings.
Sigi