Villa66s contemplations on coins are truly an inspiration to look through ones own collection in order to search for the historical events wich took place when a specific coin was minted.
some years ago I posted this breef scribling on the last Weimar- groschen in an other forum, just thought it could fit in here aswell:

With a mintage of 19,000,000 this Berlin 10 pfennig of 1936 is not a rare date . But the grade is nice, those coins appear usually entirely worn. Fortunatly also the better preserved specimens can be obtained for a small amount.

But the primary reason why I wanted to incorporate this “ groschen “ into my collection is because of the year the mintage took place.
1936 was the year when Germany hosted the Olympic games. The wintergames where held at Garmisch – Partenkirchen “ down south “, but the summer games took place in Berlin between the 1 and the 16[SUP]th[/SUP] of august.

At the time Germany was awarded the games the republic of Weimar still existed. When in 1933 Hitler gained power there were serious concerns whether or not the Olympic spirit could bloom freely under a oppressive regime. Finally 3961 athlets participated. The star of the games was US- American sprinter Jesse Owens who won 4 goldmedales.
When Owens won over german Lutz Long, Long was the first to congratulate hin with his victory.
Owens commented the event later as :
“It took a lot of courage for him to befriend me in front of Hitler. You can melt down all the medals and cups I have and they wouldn't be a plating on the 24-karat friendship I felt for Luz Long at that moment. Hitler must have gone crazy watching us embrace. The sad part of the story is I never saw Long again. He was killed in World War II.”

1936 was also the final year of the original Weimar coinage. When the nazis came into offfice they first reformed the larger denominations. The 1 mark piece now was minted of nickel, the size of the 2 mark and the 5 mark were reduced. The 3 – mark and the 4 pfennig ceased.
Eager nazis demanded the 5 and 10 pfennig wich had been produced since the currency reform of 1923 to be reformed as well, as those coins were said to show “ ungerman “ symbols. The anti clockwise direction of the oak leafs on the obverse was said to refer to the hebraic letters, wich are written from the right to the left. On the reverse the those true protectords of pure german spirite ment to spot a masonic symbol in the cross – over design of the straws. Those complaints although where not taken into consoideration. It was pointed out that the artist who designed the standard coins of 1923 only had 24 hours to do the job- and no artist could possibly hide so many symbols in a design in such a short time.

In late 1936 the coining of the last remaining Weimar – coins was stopped and the swastika coins saw the day of light. The latter are sometimes offered as “ nazi gold “ today, but that is not true. One may say the last gold issued in Germany before the war demolished the country was the olympic gold in the summer of 36. 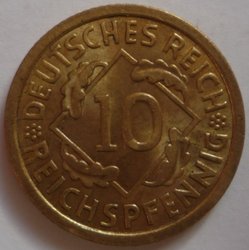 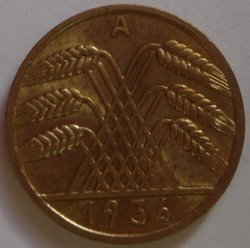 I was returning to the 1916d 10-pfennig thread to reply to your post when I noticed this thread—I don’t know how I missed it. Really glad I finally saw it—this is exactly the kind of thing I always hope to read on a forum, but rarely get to.

I’ve read this twice already, and will certainly read it two or three times more. Really fun stuff. Thanks!