x: In 1919—when this 1919 half-dollar was new—fifty cents was the price of the sheet music I’ve seen for a then-popular song, A Pretty Girl Is Like A Melody. It’s a tune mentioned by the former King Edward VIII in his 1951 book, A King's Story: The Memoirs of H.R.H. the Duke of Windsor K.G..

Prince Edward—as he was then, during his travels in 1919—had taken to humming A Pretty Girl Is Like A Melody after his visit to America, and it was a habit that his father King George V did not…well, did not find endearing. (93) 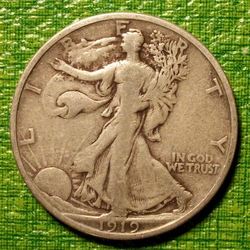 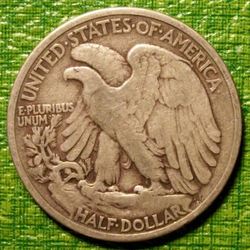 Used but somehow perfect! Best regards, KarlAntonMartini
(These Halfdollars I remember being used by US soldiers up to at least the late sixties. Then they disappeared.)
Tokens forever!
Nach oben

I've always liked this coin. It grades a bit better than it looks, since the Walkers of 1921 and before had such lightly-cut skirt-lines. But that's really beside the point--it's just a good-looking coin, and I don't know exactly why.

About the type's circulation, it is of course exactly as you say, and I owe some long-overdue words on that score to the thread that began with Italy's 1957 20-lire...