P.E. token; what and where from, bitte?

P.E. token; what and where from, bitte?

I’ve seen these tokens elsewhere and have been curious about them since I was a boy. My copy of the “P.E.” token is 21.1mm in diameter and weighs 4.80 grams. It was acquired in 1968 from within the community of NATO forces stationed in Napoli.

I had no idea what it was—and although I always read now that it’s British—my father’s guess when I asked him then was that it might be an American token from the local U.S. Navy “Post Exchange.” (A type of store that serves military personnel.)

One of the reasons Pop thought this might be so was because In the U.S. military there is a sometimes distinction between Army and Air Force “Base Exchanges”, and Navy” Post Exchanges,” and the American military community in and around Napoli was served by Navy facilities.

Can anyone here please say more about these tokens—as in where they come from or what they did? 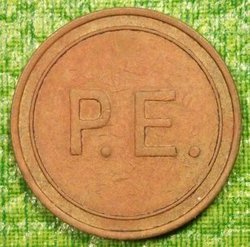 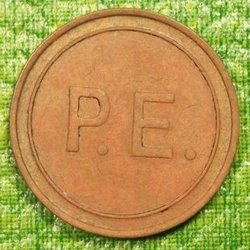 I Have got several of these tokens, always in a british context. But I did no further research because they are not old enough. Best regards, KarlAntonMartini
Tokens forever!
Nach oben

Danke, KAM. I guess maybe I'll bow to the weight of the evidence and start thinking of this piece as British. My family had considerable contact with them within the NATO community there, so I guess that must have been how I happened to get this piece. Thanks again.

There exists a piece of 3d, but also several types without denomination, so I guess "PE" might be a british based producer of fruit or vending machines. Best regards, KarlAntonMartini
Tokens forever!
Nach oben

It seems, that (like KAM wrote before) these tokens are used in the UK and they were used as amusement machine tokens.

Sie lesen gerade: P.E. token; what and where from, bitte?