I was upgrading some German coins last weekend. Among the coins I replaced were six 1-DM pieces. As usual—of course—I had mixed feelings about the process (5 of the 6 were coins I had pulled from circulation myself, enough years ago that it’s difficult to be unsentimental about them).

While looking at the new candidates, and comparing them to the coins already in the collection, I realized (yet again!) why my own collecting tastes are so date-partisan (rather than type oriented): for me, the date seems instantly to make a coin quite different from other-dated coins, even of the same design type.

Other times it’s less obvious, but still it’s there. Sometimes a complete (and occasionally quite long-worded!) narrative emanates from a coin; other time it’s a short phrase or the briefest thumbnail, like last weekend, when these coins departed my collection. So, in order of their departure….
Nach oben

1961 The Berlin Wall goes up. East versus West in sharp relief, with this 1961 1-DM circulating right at the line of fracture.... 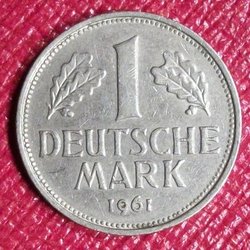 1963 Kennedy and his speech in Berlin not far from the Wall. “Ich bin ein Berliner.” Germans as heroes. What a healing thought that must have been for the users of this 1963 1-DM... 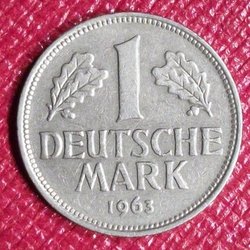 1957 The Treaty of Rome and the formation of the EEC. The return of the Saar to the Bundesrepublik. The DM isn’t even a decade old, but this 1957 1-DM is clearly circulating in a country on its way back.... 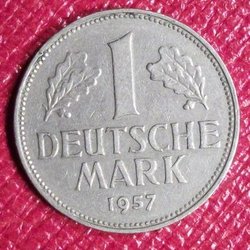 1959 The DM is now the sole currency in West Germany—the Saarland’s franken depart circulation this year. The Bundesrepublik is celebrating its 10-year anniversary. And it’s an even ten years since the end of the Berlin Airlift. This 1959 1-DM began circulating in a year of milestones…and the new decade was just around the corner, full of possibility.... 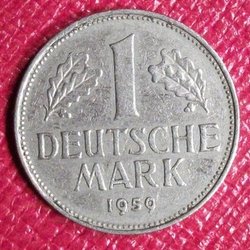 1968 The German economic miracle is an accomplished fact, but there are students in European streets, including West German streets. It is two years since the Americans were kicked out of next-door France, and the Americans within West Germany are increasingly unpopular as the war in Vietnam marries TV. But then there is Prague and the Soviet tanks come to visit next door. This 1968 1-DM was new in the pockets of a people pushed and pulled, united and divided.... 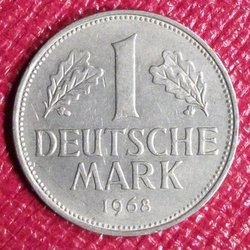 1979 The Bundesrepublik is thirty. Settled. Prosperous. But the Berlin Wall is still in place, and there Is still an “Inner German Border” to go along with Volkswagen, Mercedes , and BMW.... 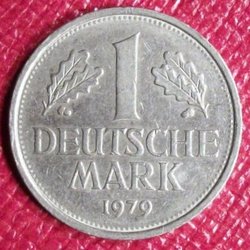 So that was half an hour a few weekends ago, and now these six German marks will soon be going home to Europe for redemption and—I suppose—destruction. Because it’s 2014….

I never had linked a DM coin's date to a historical event - a very interesting point! I lived in Germany then, collected world coins but did not consider pocket change worth a 2nd glance. Now being obsolete those coins lead to nostalgic memories

Thanks, Sigi, for your kind offer, but I guess I’m pretty well fixed for the 1pf and 2pf pieces. I hope, though, that someone else will take you up on it. Again, thanks.

Pocket change. When I first began collecting coins as a boy, somewhat valuable American coins could still occasionally be found in circulation. So I picked up the habit of checking my change and never quite got over it. When I was a soldier in West Germany during the ‘80s, I collected the Bundesrepublik’s coins out of circulation. After a couple of years I had found all the 1-DM coins (to that time) except one, the 1955j.

The shorthand name (‘55j) of this coin in (Americanized!) German tickled a friend of mine, and after he had said “Funfundfunfzig-Jay” enough times, and then started joshing me about having extended my tour in Germany so I could find a 1955j 1-DM, well, my search for this particular coin became common knowledge within my infantry company.

Then one day during my last year there, we came off a live-fire range after a long night and day. We trudged back to our temporary barracks, everyone carrying a load of equipment. We were almost there when we came across a German snack-wagon. I put down the .50 caliber machine gun I was carrying (I remember that large and heavy piece of metal very well) and bought a can of pop.

I tucked the can into a pocket for later, picked up the machine gun and began to walk. As I walked I pulled the change from the transaction out of my pocket. There was a 1-DM coin in my palm that was dated 1955. And of course a collector always hopes, so I turned the coin over, hoping…and there it was, Hamburg’s “J.”

The real fun of it, though, was how widely congratulated I was for having found it. That night, of course, but then also a week later after we had returned home to garrison. That weekend in Heidelberg we had a party of decent size—and while it’s true that soldiers will make any excuse to party—the guest of honor that night was my 1955j DM!

It got a little sticky, being around all that beer, but otherwise my little ‘55j was no worse for wear….

Anyway, as you say, Sigi, that old pocket change can "lead to some nostalgic memories."

What a heartwarming pleasure to read this lively episode! Thank you for the time you sacrified writing!
That reminds me of a friend's story of long ago. He had searched actively the 50pf 1950G Bank Deutscher Länder (a rarity with only 30.000 minted) for quite a while, bought many rolls of coins from the bank to check - but no way. Then one day his wife had laid aside a few coins for the neighbor boy who would bring eggs.
My friend turned the 50pf piece around and - bingo!

More rummaging around in the junk-boxes, and a little more upgrading. More of the idea that different dates make for different coins, and a little extra love for the idea of date-collecting. Germany’s 1-DM coins are still the subject….

1981. The German Left was revving up. The Americans had elected Reagan president and “that cowboy” was in the White House. The Soviets would aim nuclear-tipped SS-20s at Western Europe and the loud argument would be about whether NATO would deploy Pershing II missiles to counter them. A lot of 1981 1-mark pieces like this one likely marched around the perimeters and stood at the gates of American bases in the pockets of demonstrators, bought art supplies to make their flyers and their signs, and food and drink to keep them going. 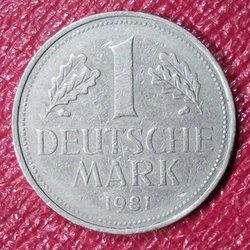 1991a. The first full year of the reunited Germany. And the mintmark is key here—a 1-DM coin of the Bundesrepublik, but coined in Berlin. The Wall was down, gone, extinguished, and 1-DM coins like this one were surely frequent visitors to party-shops during the celebrations that year and those that followed. Its connection to those celebrations gives this 1991a 1-DM a special resonance in American homes also…the successful end of a generations-long effort to give Germany back to itself, of course, but perhaps the local contributions to that effort in particular: the years subtracted from my grandfather’s life, from that of my father, and of my own too—losses experienced many millions of times over across the United States—but because of the excellent result, years not wasted! The 1991a DM…one of my favorite world coins. 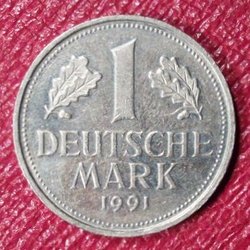 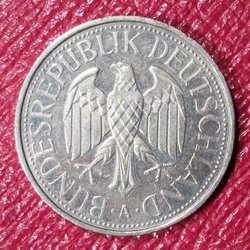 I used my own acquaintance with American coin rolls and presumed it was also the case in Germany. Please, anyone, correct me if German coin rolls could not or would not be broken as imagined below.

1971d. The instant association with München and 1971 pulls this 1-DM aside. It’s true—all the usual things were happening in the lives of the folks who first saw these coins as they came fresh from the mint and began their circulating careers. But there had to have been an underlying happiness in and around the city in 1971. The Olympics were coming. The world was coming. Cash registers were busy, and about to get busier. Rolls of these 1-DM coins got rapped against the dividers of cash register drawers to open them. Out would come the shiny new coins, spilling into the drawer. And there was the date, and the excitement—1971! 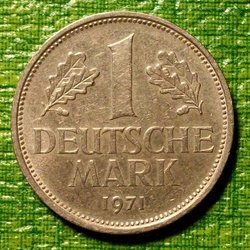 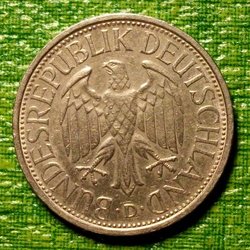