There’s a good bit of knowledge about the coinage of the British Empire, here on the Forum, so maybe…

x: A near-basal 1797 British penny with a rather elegant “2” countermark on both obverse and reverse.

As I pulled this coin from a five-for-a-dollar junk-box I remembered this from my notebook entry for Britain’s 1797 penny: ‘In Australia this ‘Copper Coin of One Ounce’ was rated a tuppenny by a proclamation issued in November 1800, ‘...that no one may plead Ignorance of the Rate or Legality of this or any other of the coins circulating in this Colony.’ Also announced was a shipment to Australia of £550 in copper coin via the ship Porpoise.”

So a 1797 British penny was also an Australian 2-pence… 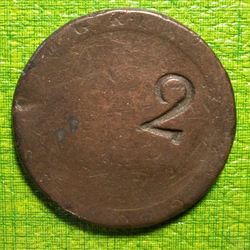 Scaife (British Colonial Coins and Tokens, 1962) reports about 1200 pounds' worth of Pennies sent to Australia in 1800. But I haven't found any report by him or other sources about counterstamping these pieces. - The style of the "2" fits to the first quarter of 19th century. But counterstamped pennies were used for many purposes, not only as Tokens but as checks etc. So a definite answer to your Questions seems hardly possible. Best regards, KarlAntonMartini
Tokens forever!
Nach oben

I’m sorry this is so late in coming—I can only plead a prolonged and unavoidable digital drought.

Danke, KAM, for your good answer. I especially appreciated the observation concerning the possible vintage of the numeral’s style. It never even occurred to me.

I note—despite my trying to connect it to Australia—that this particular countermarked penny was keeping company with a couple of old Canadian tokens when I found it.