Imperial Germany’s 1916d 10-pfennig struck in München. This copper-nickel coin is 21mm in diameter and weighs 4.00 grams. WWI worked a hardship on German coinage. Iron, zinc and aluminum became coinage metals of necessity, with 1916 perhaps being the break-point. (Although the 5-pfennig piece got an early start, appearing in its wartime iron format in 1915.)

As it turned out, these 1916d 10-pfennig pieces would be Germany’s last copper-nickel coins for some time.

But not until 1949 and the “Bank Deutscher Länder” 50-pfennig of the embryonic Bundesrepublik would copper-nickel again be used for a German circulating coin, some 33 years after it had last appeared in this 1916d 10-pfennig. 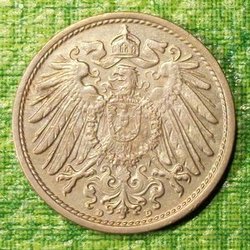 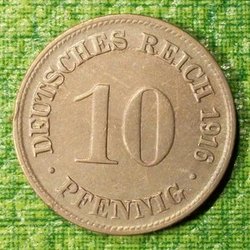 The " Last of the Empire " standardcoins struck after the outbreak of WWI would perfom a nice set, also containing the last silvermark only struck at the Stuttgart mint in 1916 and of course two of the greatest numismatic puzzles of the WWI coinage ; the 1915 3 - mark of Baden and the 20 mark wich was minted in Berlin that year. Funny enough the only denomnination wich survived the war was the 1/2 mark, last minted in 1919 in good silver, as if the shots of Sarajewo never happend.
Grüsse, Mynter
Nach oben
2 Beiträge • Seite 1 von 1