Can someone please tell me whether this notgeld piece was actually produced c. August 1923, or might it be some later souvenir piece? I want to know how much I might need to modify the following to make it true...

Unlike the pfennig-denominated notgeld that proliferated during WWI and the early postwar—zinc, iron, aluminum—the 1923 inflation was a largely paper affair. The inflation was just too fast-moving for metal coins (tokens) to make much sense, so much of the “coinage” that did appear was obviously aimed at collectors. This 500,000-mark piece, however—with its high-denomination, low-cost material, and reasonable size—has the look of something actually intended for use.

Its nearly uncirculated condition, though, assures us that whatever the intent—this piece did not circulate much, if at all. But then why would it? It carries a date of August 1923, and by 1 November 1923 (so says a contemporary German medallion), a single glass of beer cost 4,000,000,000 marks.

The arithmetic is cruel, to say the least. To buy that glass of beer in November, a person needed 8,000 of these notgeld coins—these coins from August—in his or her pockets.

And that would have been at the beginning of the night. By closing time it was likely a different story altogether. 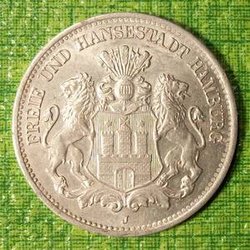 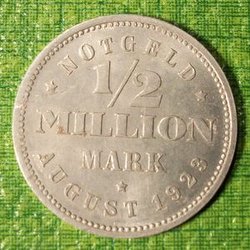 I was not able to find any source indicating when -or even if -theese emergency coins really where released into circulation, but I definatly would exclude any souvenir- purpose. The gigantic inflation of 1923 was a shock wich struck deeply in peoples mind,perhaps even until today. When the euro was introduced 13 years ago many germans thought of that event like a currencyreform and as if they now would suffer a severe loss of their values.
If the coins did play any role in daily commerce in the august of 1923 ,I can not say, probably not,as they typicaly seem to appear in rather good condidition.
Grüsse, Mynter
Nach oben

Thanks, Mynter. I was posting the Hamburg notgeld piece and it suddenly occurred to me that I had just assumed it was a contemporary piece. (As few of them as I have actually seen—exactly 1, and I bought it(!)—I was suddenly afraid I was dealing with a fantasy piece or some such.)

So good, if it’s very likely a contemporary piece, which means I didn’t overreach in my comments.

You’re absolutely right about the impact of the inflation this token/coin represents. I was going to include something like that, but ran out of room (both within the conventions of thread I’m posting in, and of my notebook, where entries are limited to 13 lines). But what you say is true in the U.S. too. The German inflation of 1923 still strongly resonates with people. I suppose that’s mostly because of what followed--the 1923 inflation is often given the lion’s share of the blame (at least in the U.S.), so the ’23 German inflation registers with us in a way that similar events in 1940s Hungary and Greece just…don’t.

One quick story I read once of the ’23 inflation involved a relatively rich woman who had left Germany for Switzerland during WWI and had stayed on. Apparently she felt somewhat insulated from conditions back home, because—as I read the story—one day she was surprised to get a letter from her (German) bank saying they had closed her account, and that they had used her remaining bank balance to buy the postage stamp with which they had mailed her the letter.

Anyway, a lot of coinage has come and gone since 1914. Most of it wouldn’t mean much to the folks I know, especially if the subject were their present-day lives—but this 1923 Hamburg 1/2–million mark piece is a special case, and I think it would give many of them pause. It still talks.

Thank you again for looking into this token/coin for me. On this piece anyway, It puts my mind to rest.

your coin belongs to the smaller group of "Staatliche Notmünzen", that means, these emergency coins were released by the German states, e.g. Anhalt, Braunschweig, Hamburg. Here (click) you'll get a dealer's price list for this category.

The Hamburg coins are timely, in August 1923 the face value of common emergency bills all over Germany changed from tens of thousands over hundreds of thousands up to millions.

Hope, this will help you...

It does help, and I definitely appreciate your time and trouble. Gives me a broader picture of this species of notgeld, and of this piece in particular. Danke!