If anyone else ever wondered whether Italy’s gold 20-lire (“Marengo”) had its nickname appropriated by the Italian Republic’s aluminumbronze 20-lire of 1957-2001, the answer, apparently, is no…

Too bad, maybe, that the Republic’s new 20-lire piece wasn’t also known (even ironically) as a “Marengo.” But the original inspiration of this nickname for Italy’s traditional gold 20-lire—the French victory over the Austrians at the Battle of Marengo—well, I think I begin to understand why “Marengo” remained a thing of the past. (Just too many cross-currents, and with the new coin’s introduction in 1957, only a dozen years after the war, too great a need, maybe, for a fresh start.)

And I note here a change in my thinking. I always considered the short run (1957-59) of the Republic’s 20-lire as evidence of a failed coin. But that was because I had learned about them in 1966-67, before the appearance of new dates in the series.

Instead, or so I’ve been told, the production pause is better understood as part pf the general pause in the minting of Italian small coins during the late-50s and early- to mid-1960s.

When I was i Italy in 1981, I had to trawl the post- offices in order to get hold of a 20- lire- piece.I never saw one circulating, while the 10- lire -coins still where quit common. Was the 20- lire indeed unpopular or was it perhaps withdrawn to avoid confusion with the new 200- lire ?
Grüsse, Mynter
Nach oben

Really a good thought, but after looking into it some, I don’t think so. One big reason is because in 1981 Roma produced the largest number of 20-lire pieces in the entire 1957-2001 series. And more evidence that the aluminum-bronze 20-lire died a natural death is the following entry I found in my notebook:

: By the time this 1987 20-lire piece was minted, these coins were departing circulation. It was a natural response to inflationary pressure. Day-to-day Italian transactions were—more and more—being rounded to the nearest 50 lire. (01)

But when you were in Italia in 1981 you had difficulty finding them, and when I visited in ’85 that was my experience too.

Well, the dynamic driving my ’85 experience in not seeing the 20-lire in change may well have been the reason given above, but…

Your ’81 experience might be something quite different, because I also found this entry in my notebook:

x: When freshly-minted, 20-lire pieces (this one is dated 1974) often impressed people as being coined in much more expensive metal than they were. Gold, perhaps? So went the rumor, sometimes. (01)

I don’t know why I appended that note to a 1974-dated 20-lire. Likely because I connected that random curiosity about 20-lire pieces (rumors of gold!) with a date during the big Italian coin shortage, thinking maybe it might have been just one more contributing factor.

Think maybe that elevated 1979-81 production might have been a mint trying to keep a coin in circulation that was being hoarded by an ill-informed public during a gold frenzy? Which might help explain why you didn’t see them in circulation in ’81.

But all this is just me talking. I’ll ask on the Italian forum. In the meantime, Mynter, thanks for the fun I’ve had playing around with this.

We talked some about the 20-lire coin on the Italian forum, and I read remembered some more, and came away with the following:

!) The aluminum-bronze 20-lire of 1957-2001 did indeed die a natural death, done in by inflation. (Although it suffered from other disabilities along the way.) Pro forma quantities only were coined after 1992.)

2) During 1966-69, the coins in common circulation—in Napoli and the surrounding area, anyway—were the 5-, 10-, 50-, and 100-lire, with the 20-lire being somewhat less common, and the 500-lire, common at first, rapidly disappearing in favor of a paper note. (“Caravels” were seen much more often than “Centennials.”) The 1-lira and 2-lire were completely out of circulation. Very, very occasionally a Vatican City 100-lire from the ‘50s would show up. (American coins—mostly older than those circulating at home—circulated within the military community, and still had some currency locally—especially Kennedy half-dollars, which were always accepted.

5) Until the 1977 advent of the aluminum-bronze 200-lire, the 20-lire coin was of singular appearance within the Italian series, and was often removed from circulation by collectors, accumulators and souvenir-hunters.

6) The rumors of the presence of gold in the 20-lire added to the pressure on the coin. Might that have been especially so during the gold frenzy of 1979-80? Maybe so. Heck, probably so. But that dynamic seems unlikely to have made any sort of disabling impact on the 20-lire’s circulating presence. And certainly not, with the series’ production peak in in 1980-81.

7) A tantalizing mention was made of Italian soldiers being paid with freshly-struck 20-lire coins about 1979 or 1980, but the reference was not confined to 20-lire coins, and despite the prompt, no other posts mentioned anything similar.

#8 Finally, another disability afflicting the 20-lire was repeatedly mention. That is, the 20-lire, once inflation moved the cost of things beyond its specific price-points (where the coins were individually useful for exact payments or for making exact change), the more flexible 10-lire tended to crowd them out.

villa66 hat geschrieben: ↑
Fr 25.10.19 08:20
(American coins—mostly older than those circulating at home—circulated within the military community, and still had some currency locally—especially Kennedy half-dollars, which were always accepted.

Hello villa
ever since I read your latest Marengo- posting,I wanted to send a reply, but I never came around before today. I found your remark on the older US- coins still circulating in a foreign military-camp quite interesting. By older coins you probably mean Walkers, Mercuries , Buffalos and Wheats ? What became to the older silvercoins when the american coinage was debased in 1965 ? Did they disapear at once or did they continue to circulate ?
Grüsse, Mynter
Nach oben

Mynter: "... found your remark on the older US- coins still circulating in a foreign military-camp quite interesting. By older coins you probably mean Walkers, Mercuries , Buffalos and Wheats ? What became to the older silvercoins when the american coinage was debased in 1965 ? Did they disapear at once or did they continue to circulate ?"

Thanks, Mynter, for this interesting question—and I’m sorry it’s taken me so absurdly long to get back with you.

Funny thing. I had been thinking about just this subject, and because something quite new had occurred to me—after all these years—I had recently photographed the coin below. But then I got sidetracked, of course. Tomorrow I’ll write that paragraph. In the meantime…

From my small special collection of items kept for sentimental reasons, a 1917 half-dollar I pulled from circulation in the American military community in and around Napoli in September 1966.

We were new arrivals in Italia and were staying at the Turistico Averno near Pozzuoli, I can remember spending a lot of time at our family table in bungalow 8, just looking at this coin. It seemed impossibly old to me as a boy, and looked the part too. 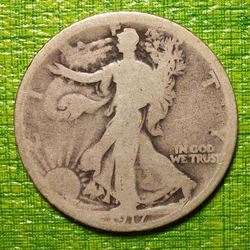 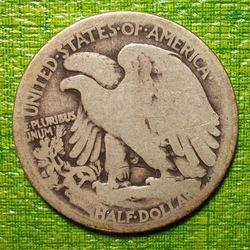 Amazing find. A Half minted in the year of the Russian Revolution !
Grüsse, Mynter
Nach oben
7 Beiträge • Seite 1 von 1