Below is an American 5-cent piece (“nickel”) of the 1913-1938 type. Often now called an Indian Head 5-cent piece, but in the old days it was almost always a Buffalo nickel.

Buffalo nickels—the coins my great grandfather Tom was referring to when he would tell of the neighbor who was so cheap he would “squeeze a nickel until the buffalo screamed.”

That was the story when children were within earshot, anyway. It was the other end of the buffalo that the adult version focused on. (And I’ll bet this “squeeze a nickel until the buffalo sh-t” went far beyond mere family history, and was current in many parts of the country during the cash-poor 1930s.) 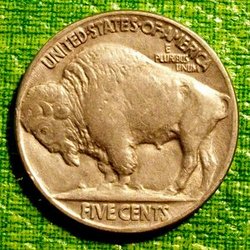 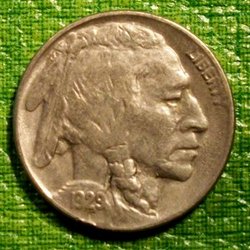 As a boy I spent many of these coins myself in the mid-‘60s, but only the ones with their dates worn off. (I saved the few full-date coins.) Who could have known that the jewelry makers would someday pay three or four times face value for even the dateless ones?

And I do know the name of that long-ago cheapskate—the buffalo-squeezer himself—but out of respect for his son I won’t write it down. The son is a very old man now, but when he was young he landed in Normandy on “D+18” and fought his way through France and into Germany as a combat infantryman.

Which I mention for two reasons….

One, beginning with the 1929-dated coin above, the background story for the Buffalo nickel becomes economic hardship devolving into world war, and this small mention of a Depression-era penny-pincher/”buffalo-squeezer” and his WWII-soldier son fits that template pretty neatly.

Hello villa,
allways fun to read your contemplations on coins ! I just add my Buffalo nickel. A remarkable design ! 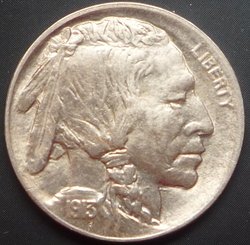 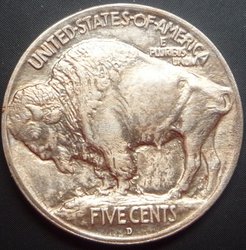 Nice one! Thanks for the look. And here’s a note about another of these coins:

The last Buffalo nickel, the 1938d. (Last-year pieces like this one were minted only in Denver, with their coinage being completed in April, ‘38.) The end of the trail. And a good place, maybe, to borrow from The World Almanac of the USA a vignette from the new-Old West: “The first telephone poles in Wyoming made such attractive scratching posts for buffaloes that as many as 30 of the huge animals might be seen waiting their turn to rub against one.”

Hi, what appears to be a link The World Almanac of the USA doesn't work.
Sigi.
Sieh meine Russland-Kupfer-Sammlung
www.sigistenz.com
Nach oben

sigistenz hat geschrieben:Hi, what appears to be a link The World Almanac of the USA doesn't work.
Sigi.

That’s kind of fun, in a strange sort of way(!). I pulled the above anecdote from a print copy of he book 20+ years ago, before I really even knew about the Net. (My copy had a yellow cover, and I might even still have it. I’ll check tomorrow, after the grandkids depart.)

Thing is, I clearly remember not being that taken with the book—it just didn’t compare to the usual run of World Almanacs—which I loved as a kid, and after. Anyway, it kind of tickled me to learn they might be on-line. I’d never thought of the book as anything but printed pages, and one-off printed pages at that.

I found the book, Sigi, in case there's something I should look up.

I'm posting a little additional info on Buffalo nickels at the end of their circulating careers--one of my Italian friends had been surprised by hearing they were still circulating in the 1960s.

Here’s well-known numismatist Q. David Bowers in his 2008 book Grading Coins By Photographs: “Buffalo nickels became widely popular to collect beginning about 1935, when cardboard panes and pages became popular…Collectors sought Buffalo nickels from circulation until the 1960s, after which most were gone.”

By 1964—66 in the middle of the U.S., the Buffalo nickels I saw were mostly dateless (worn off in circulation), but there were still a number of full-date coins from 1935-1937 in circulation.

These were almost all Philadelphia strikes, of course—mintmarked Buffs were very scarce in circulation. I did, however, think it was a little strange that I never encountered a 1938d—the last of the Buffaloes. (But later I learned of their relatively small mintage.)

We moved to Italia later in 1966, and remained until late 1969. By then Buffalo nickels—even the dateless ones—had disappeared from circulation.

So then I started looking for the silver nickels of 1942-45!

Sie lesen gerade: Until the buffalo...screams?