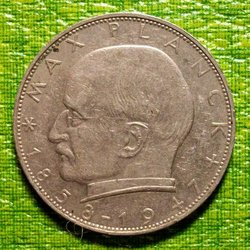 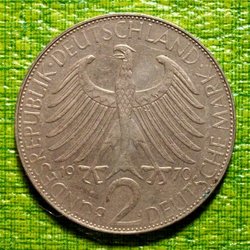 It was a nice idea to have an important scientist on a regular coin. - This was the "Zwickel" of my childhood. Best regards, KarlAntonMartini
Tokens forever!
Nach oben

The Planck 2DM caught my attention as a kid too. We visited the BRD in 1967, so I met this coin in person, in circulation.

The double-date was maybe the first I ever saw on a circulating coin, and it seemed extra strange because it didn’t follow the “rule” for double-dates: that is, the second date wasn’t the year of manufacture. (So that rule, which I’d learned from my slight experience with American commemoratives—and my stamp-collecting Pop—went out the window after I met Planck’s 2DM.)

I asked Pop who the guy was, and he told me that Planck was a famous scientist, and I too was charmed by the idea that a person could get onto a coin without being a king, queen or president.

(Walking Liberty half-dollars, Mercury dimes, and dateless Standing Liberty quarters and Buffalo nickels still hadn’t completely disappeared from circulation when we’d left the U.S. the year before, and even as a little kid I was aware that the proliferation of presidents on our coinage meant we were losing something.)

KarlAntonMartini hat geschrieben:It was a nice idea to have an important scientist on a regular coin. - This was the "Zwickel" of my childhood. Best regards, KarlAntonMartini

In my childhood- days in the seventieths the Planck , who had vanished in 1971 was a " ghosty coin " to us who where interested in stamps and old money. Being not legal tender any more we where convinced that any Planck was worth 80 marks, wich was an amount bejond our imagination. And one day I really picked up a Planck . I can not tell any more where I got it. With a mounthly allowance of 10 marks,usually handed out in a crisp blue 10- mark note I might very well have gotten it with the change when I bought my weekly Micky Mouse- magazine. I immedialtly showed my find to my father who to my great dissapointment told me hat my beaten up specimen hardly was worth anything.
Grüsse, Mynter
Nach oben
4 Beiträge • Seite 1 von 1