With apologies to the Forum for English-only,

A 1980 5-peso coin from Colombia that I’ve only half noticed before now. This is a first-year example of a very common type, of an attractive blond copper alloy, that was coined from 1980-89 until being replaced by a smaller 5-peso coin of different design (both large and small 5-peso coins exist dated 1989).

Every once in a while over the years I’ve glanced at these 1980-89 5-peso coins and been nagged by the unarticulated conviction that something was wrong in the odd posture of the woman. (Her hands look as if they’re behind her back....) But the coin’s reverse depicts an apparent run-of-the-mill industrial scene.

Finally, the other day, I took a good long look at this 5-peso coin and then Googled the word beneath the figure, “Policarpa.”

Policarpa Salavarrietta was a hero of Colombia’s war of independence against Spain. The date of her birth is unknown, and is thought to be sometime between 1791 and 1796. The date of her death, however, is known exactly: November 14, 1817.

On this 1980 5-peso piece, “La Pola,” (as Policarpa was known to her contemporaries), does indeed have her hands tied behind her back. She is in front of a firing squad. And it is November 14th, 1817....the moment before her death. 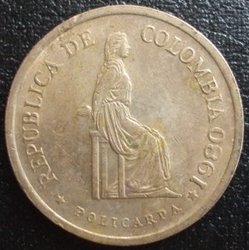 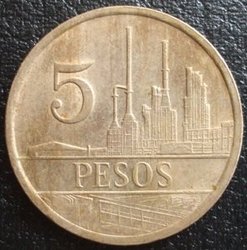 Thank you for this hint on an interesting piece of Colombian history. Policarpa is totally unknown here, not even a german entry in Wikipedia, http://en.wikipedia.org/wiki/Policarpa_Salavarrieta
Grüße, KarlAntonMartini
Tokens forever!
Nach oben

KarlAntonMartini hat geschrieben:Thank you for this hint on an interesting piece of Colombian history. Policarpa is totally unknown here, not even a german entry in Wikipedia.
Grüße, KarlAntonMartini

But she has got an entry (Kolumbien S#96) in the German language Weltmünzkatalog (World Coin Catalogue) where the design is described as the monument in Bogotá showing her right before her execution.
http://numismatik-cafe.at/download/file ... &mode=view
http://numismatik-cafe.at/download/file ... &mode=view
Greetings,
gs
Deutscher Münzkatalog, Euro Münzkatalog, Weltmünzkatalog.
Nach oben

Thanks much for the pictures of the Denkmal, Gerhard; pulls the coin image out of its awkward 2-D and gives it some 3-D meaning.