We were talking elsewhere about someone’s newest acquisition, a Spanish 100-peseta from 1966. He was very excited about it---which was fun to hear—because it completed his Francisco Franco coins.

Franco’s portrait is that of an older man, somewhat shrunken, not like the fuller-faced portrait on the coin series launched from the late-‘40s through the late-‘50s. But the reverse coat-of-arms is a different story, all Sixties-modern and fashionably incomplete.

Spain’s 1966 100-peseta is a very common coin, of course, but still it stands apart from the crowd. It was a part of the last gasp of the world’s circulating silver, and it was a high-value coin in its day, with real spending power.

Here was one way to have spent a big silver 100-peseta….

x: When it was new, this 1966(66) 100-peseta piece would have bought one of the Madrid bullfight’s 75-peseta seats recommended by Arthur Frommer in the 1966-67 edition of his seminal Europe On 5 Dollars a Day, together with the 15 pesetas owing to the ticket broker, and the 3 pesetas for a leather cushion, with perhaps enough left over for a drink and a program. (xx)

A half-century ago. Yikes. 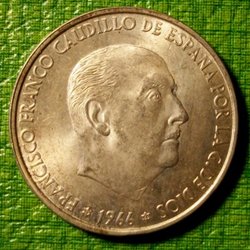 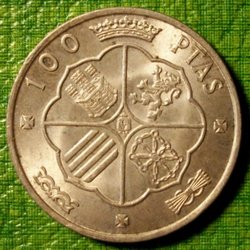 Magnificant coin depicting a horrible guy. Looking at the Spanish postwar coins gives you an idea og what might have been in Germany if not Adolf had carked it.
Also of interest, the first coinage of Juan Carlos includes a 100 peseta of the same size as the Franco- coin, the composition used in 1978 of course is of basemetall . But apparently even in the late 70s a hundred pesetas where a considerable amount worthy of a large coin.
Grüsse, Mynter
Nach oben

Guess for me this coin is so much a creature of the go-go '60s that Franco seemed beside the point, and I failed to give this coin its due. But you're exactly right, so I mention two things I noticed while cropping these photos: 1) the presence of "Caudillo," which was a quiet surprise, and 2) the ever-present problem with this portrait when holdering or displaying these coins--trying to keep the guy's nose out of the air.

Older and somewhat shrunken, as I said, but still trying to strike a heroic pose. (Notice on the photo how I was cheating the date to lower his nose!)

This thread animated me to have a closer look at the Caudillo. So I called my bookseller to order a solid written biography of Franco. The result: there is none, at least not in german language. Best regards, KarlAntonMartini
Tokens forever!
Nach oben

KarlAntonMartini hat geschrieben:This thread animated me to have a closer look at the Caudillo. So I called my bookseller to order a solid written biography of Franco. The result: there is none, at least not in german language. Best regards, KarlAntonMartini