I was in a lock-box a couple of days ago and met up with this old friend for the first time in a dozen years. As a coin to be collected, it has major problems. As a personal memento, however, it bats a thousand.

x: The large silver piece—repeatedly polished—from the free city of Frankfurt am Main, where Dad spent a portion of his early manhood as a paratrooper of the 82nd Airborne’s 508th Parachute Infantry. The experience loomed too large for him to ever part with this coin, which was the undisputed star of the group of coins he showed me that very first night in ‘64. (It was more than a hundred years old!)

Pop told me what he knew of it, about the Czech DP (“Displaced Person”) who had given it to him in ‘46, of its having been dropped by a college friend and dinged about 1951 (the memory retained the power to upset him), and on occasion down through the years Dad would trot out this big coin to taunt me.

He always enjoyed my wanting it. And I had wanted it, at first. But it soon dawned on me that I would own this coin only on a day that my father was dead. So I stopped wanting it most profoundly, although to please Pop I pretended otherwise for nearly thirty years. 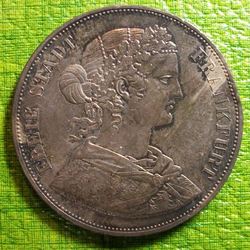 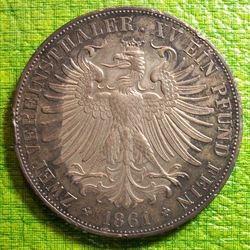 Hello v,
one of the best coinstories ever told.
Grüsse, Mynter
Nach oben

Thanks for showing this nice coin.
I do also have a small "special" collection with coins that i only keep because of their story behind it.
But none of them could be compared to your coin and it's history.