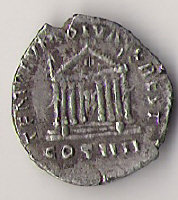 No trace remains today of this temple to the deified Augustus and Livia. It was built by Tiberius or as a joint effort of Tiberius and Livia. According to Suetonius, Tiberius did not finished the temple, and it was completed by Caligula. Tacitus, however, says that Tiberius finished the temple, but for some reason did not dedicate it agreeing in this with Dio. In this temple were statues of Augustus, of Livia set up by Claudius, and probably of other deified emperors. It was destroyed by fire at some time before 79 AD, but restored, probably, by Domitian, who seems to have constructed a shrine of his patron goddess, Minerva as an adjunct to it (Most likely it was struck by lightning in 69 AD]. A considerable restoration was carried out by Antoninus Pius, whose coins ... show an octastyle building with Corinthian capitals, and two statues, presumably of Augustus and Livia, in the cella. The last reference to this temple is in 248 AD. Pliny refers to one painting in the temple, that of Hyacinthus by Nicias of Athens, which was placed there by Tiberius [Plin. NH xxxv. 131]. The temple illustrated on the coins of Antoninus Pius presents the viewer with great detail. The quadriga on top and the relief in the pediment feature Augustus. The figure on the left eave of the roof represents Romulus and Aeneas is on the right leading his family through the flames of Troy. Two statues of Victory flank the steps. 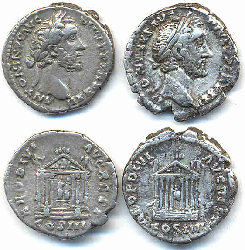