Thanks for the link. It would have been good if you had immediately stated that you were reproducing Kuhoff's arguments, especially since they are controversial and many standard works accept that Domna only became Mater Patriae et Senatus in 211, not 205! Objections were to be expected, so you should have stated your source for the innovative chronology. I will exceptionally respond in English, because the subject is complicated and I don't have the time to translate my thoughts into German!

I am not convinced by Kuhoff's arguments. I still think it very likely that Julia only received the titles Mater Patriae et Senatus after Septimius' death in 211.

1. As far as I can make out, Kuhoff can cite no intact inscription that gives Julia these titles before 211. The only inscriptions that apparently call her Mater Patriae et Senatus earlier are those where these titles replace an eradicated original name, usually that of Plautilla. But we can't be sure that these titles of Domna were added immediately after Plautilla's name was removed from the inscription early in 205. Maybe a blank space was left in the inscription, until that space could be filled by the titles Mater Patriae et Senatus that Domna didn't receive until 211.

2. The fall and execution of Plautianus and the banishment of Plautilla in 205 seems to me a singularly inappropriate occasion for the Senate to vote ecstatic titles to either the emperors or to Julia Domna. Plautianus' fall was a disaster, not a time for mutual congratulations and back-slapping! As we know, the emperors were initially reluctant to accept imperatorial acclamations, a form of congratulation, for victories over fellow Romans in civil wars. And why in the world should Domna be singled out for special honors after the fall of Plautianus? She didn't like Plautianus, yes, but it was not she who was the immediate target of his alleged conspiracy, but rather Septimius and Caracalla.

On the other hand, the death of Septimius in 211 was the perfect occasion for Domna to receive the titles Mater Patriae et Senatus. Compare a close parallel, the honors that the Senate voted to Livia after the death of her husband Augustus and the accession of her son Tiberius in 14 AD. "The adulation of the senators towards Livia was also excessive. Some proposed that she should be called 'Parent of the Fatherland', while others suggested 'Mother of the Fatherland'. Some proposed that 'Son of Julia' should be added after Tiberius' name" (Tacitus, Annals I.14, my translation). The strict Tiberius, Tacitus goes on to say, turned these honors down. But it is extremely likely that similar honors were voted to Julia in 211, and there was no reason for Caracalla and Geta to reject them! No one disputes that Domna was also voted the exceptional titles PIA FELIX on this same occasion, the death of her husband and accession of her sons as ruling emperors in 211.

3. If Julia was already voted the titles Mater Patriae et Senatus in 205, why were they not immediately placed on her coins? It was of course natural for new titles and new honors to be immediately commemorated on the coins. So Julia's title Mater Castrorum, which she may have received in 195, was commemorated in a coin type of 196 after Septimius' defeat of Clodius Albinus. Why the delay until 211 in the numismatic commemoration of Julia's titles Mater Patriae et Senatus, unless that was also the date of their conferral, so there was in fact no delay?

According to Kuhoff, since Julia's titles MAT AVGG MAT SEN M PATR appeared on the coins only in 211, and did not appear later, with the adjustment of AVGG to AVG, although Caracalla remained emperor until 217, therefore it is not significant that the coins did not give her these titles before 211, though she had received them (according to Kuhoff) in 205. The postulated numismatic silence before 211 is paralleled by the proven numismatic silence from 212 on. But this argument ignores the natural inclination for important new honors to be commemorated immediately on the coins. It would be very strange if Julia received the titles Mater Patriae et Senatus in 205, but they did not appear on the coins until 211. The numismatic silence after 211, on the other hand, is easy to understand: these were Julia's official titles and so of course continued to appear in her inscriptions, but they were inevitably reminiscent of the year 211 and Caracalla's unfortunate conflict with Geta, so there was no reason to trumpet them forth on the coins!
Zuletzt geändert von curtislclay am Mi 31.07.13 20:01, insgesamt 2-mal geändert.
Nach oben 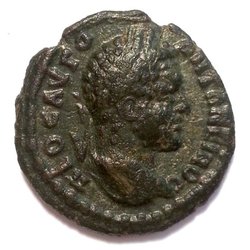 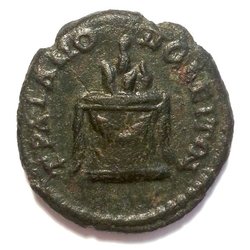