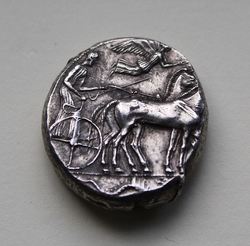 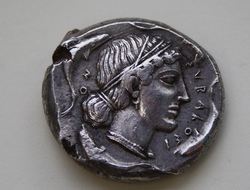 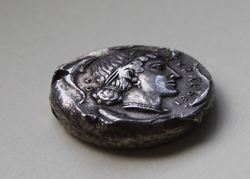 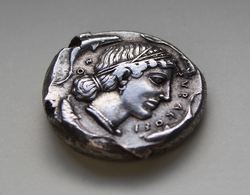 Alexander III, 336 – 323 and posthumous issues. Decadrachm of 5 shekels, Babylon circa 327, AR 40.08 g. Alexander on Bucephalus facing r., spearing at a mahout and his master seated on an Indian elephant retreating r.; the mahout and master look back towards Alexander, the latter grasps the end of Alexander’s sarissa with his r. hand, the former brandishes a spear in his r. hand above his head while holding two further spears in his l. hand; above, [Ξ]. Rev. Alexander standing l. in military attire, wearing plumed Phrygian (?) helmet and holding a thunderbolt in his r. hand and a sarissa in his l.; above, Nike flies r. to crown him. In lower l. field AB ligate. BMC 61 and pl. XXII, 18. Price, Circulation at Babylon in 323 B.C. in Mnemata: Papers in Memory of Nancy M. Waggoner, p. 70, 12 and pl. 15, 12 (this coin illustrated). Price, The Poros coinage of Alexander the Great, a Symbol of Concord and Community, in Studia Paolo Naster Oblata, pp. 75-6, OA/Rc. Mitchiner Type 21. Dürr, Neues aus Babylonien, SM 94, May 1974, p. 36, 1.
Exceedingly rare, ten specimens known of which only five are in private hands. An issue
of tremendous importance and fascination, of which this is undoubtedly one of the
finest specimens known. Areas of weakness, but unusually clear and complete and
with an unusually metal good for the issue. Good very fine

Ex New York sale XXVII, 2012, Prospero 304. Privately purchased from Spink & Son 15 July 1989.
In 327 BC, Alexander the Great and his army entered the Indian subcontinent and made war on a regional Punjabi king named Porus. At the Battle of the Hydaspes River (327 BC), the Macedonian army faced the Indian forces of Porus and his war elephants-terrifying creatures that no Macedonian or Greek in Alexander’s army had ever seen or faced in battle before. However, despite the fear inspired by the elephants and the deadly accuracy of Porus’ archers, Alexander’s army won the day. Respecting the bravery and fighting spirit of Porus, Alexander appointed him as a local satrap to govern the region on his behalf. Alexander then continued the exploration and attempted conquest of India despite the increasing misgivings of his men. At last, in 325 BC, the army finally mutinied near the Ganges River and forced him to begin the long and grueling westward march home. This extremely rare coin, one of the so-called ”Porus medallions”, is thought to have been struck as a form of commemorative donative paid out to the army after the return from India. The apparent use of the shekel weight standard has led to the conclusion that the coinage was produced at Babylon or possibly Susa while the specifically Indian and martial types may have been intended to remind recipients of their former glory in the East at a time when the army was tiring of Alexander’s campaigns and desirous of returning home to Macedonia. In 324 BC, the army mutinied again at Opis in Babylonia and demanded that Alexander begin demobilizing his loyal and long-serving veterans. The present piece—the largest denomination in the ”Porus medallion” series—features remarkable types that are completely new for Greek coinage. The obverse seems to represent a remarkable duel between Alexander, charging right on the back of his famous steed Boukephalos, and Porus riding on the back of an elephant with an attendant. Alexander spears the attendant in the back while Porus turns to attack him. What is most interesting about this type, in addition to the fact that it is one of the earliest numismatic representations of an elephant, is that the duel shown here never seems to have taken place. The type, especially when read in connection with the reverse showing Alexander crowned by Nike, implies a direct victory over Porus in personal combat. However, none of the ancient historians, including Arrian, Curtius, or Plutarch ever suggest that any sort of duel like this ever took place. Instead, they report that Alexander fought alongside his own cavalry, but also watched Porus fight with admiration, frequently sending messengers to ask him to surrender in the hope that the Indian king would not realize his plan to die in battle. In the end, Porus did surrender, but not because he had been defeated personally by the Macedonian king, but because he was conquered by thirst and exhaustion. In short, the type is really puffed up propaganda for Alexander’s greatness. The reverse depicts the full figure image of Alexander the Great fully armed and armored for battle and crowned by Nike. This is the first unequivocal portrait of the famous Macedonian king on a coin (there still remains much doubt as to whether the image of Herakles on his imperial tetradrachms was considered to represent Alexander during his lifetime), but even here he is shown as something more than a mere mortal. He is elevated to the level of Zeus, the supreme god of the Olympian pantheon, by the placement of a thunderbolt in his hand. The type seems to advertise Alexander not only as a world conqueror, but as a conqueror of the universe extending even into the realm of the gods. The type appears to be related to a lost painting of ”Alexander wielding a thunderbolt” executed by the court painter Apelles.
Gruß,
antoninus1
Nach oben 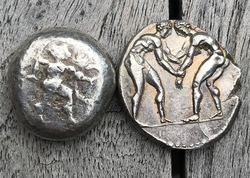 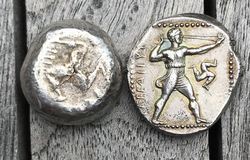