Here is my translation into English:

CONSTANTIA AVGVSTI S C, young man wearing helmet, lightly clothed to the knees, and wearing a cloak hanging down behind his back, raising his extended right index finger towards his mouth and holding a scepter in his l. hand. Middle bronze, common.

My predecessors have described the type of this second coin a number of different ways. The description I give derives from five very fine specimens in the Vienna Collection. The same inscription also appears on coins of Claudius' mother Antonia struck during Claudius' reign, but there the type is different, being a woman standing holding a long torch in her r. hand and a cornucopia in her left. When discussing those coins, I said that it was difficult to reconcile their legend with their type, and that the legend apparently applied to Claudius, which the two types described above now confirm. But in these types too it is difficult to reconcile the images with the legend, though it seems clear that the reference must be to the contempt, taunting, and dangers that Claudius had to endure from his childhood on, all of which evils an unconquerable Constancy allowed him to overcome. This interpretation is confirmed by the gestures of the female and male figure alike, enjoining themselves to remain silent, which is one of the most important components of Constancy. Roman mytholgy includes two guardians of silence, Angerona and Tacita, about whom I wrote at length in my Sylloge. Whether there was also a male Roman guardian of silence, comparable to the god called Harpocrates in Egypt, I am unable to say.
Zuletzt geändert von curtislclay am Do 04.06.09 16:38, insgesamt 1-mal geändert.
Nach oben 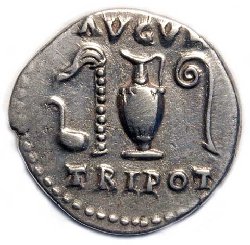